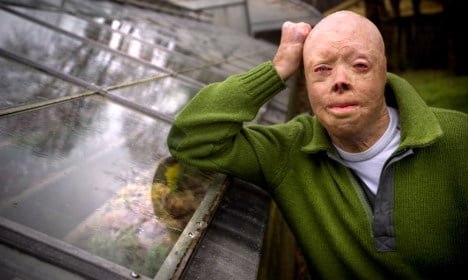 Swedish firefighter Lasse Gustavson has made a name for himself as a motivational speaker in Sweden, after an industrial fire in the line of duty more than 30 years ago left him with severe burns on his face.

He has grabbed both national and international headlines in the past week after monitors at Facebook twice took down an image of him posted by one of his friends celebrating Gustavson's 60th birthday.

The social media site backtracked after widespread outrage, saying it had been “removed in error”. “We have corrected the problem and notified the person who posted it to let them know and apologize,” it said.

Gustavson told The Local on Tuesday that he doubted the truth of Facebook's explanation.

“I'm more inclined to believe that it's some kind of program that needs to be upgraded. If it is a person, as they say, I hope they will upgrade their own values and procedures,” he said.

The 60-year-old has been fielding questions from journalists all over the world since his story went viral, sparking a debate on Facebook's rules for removing content it deems offensive.

“I take the international and national reactions to mean that people in general feel that Facebook's censorship of my friend's photo and birthday wishes is wrong and offensive. It makes me happy and proud that people react to things that don't match their values,” he said.

Before Facebook's apology, his friend, Björn Natthiko Lindeblad, posted the picture a third time and encouraged people to join in the protest. It was shared more than 30,000 times in three days.

In September the social media giant was forced to backtrack on a decision to censor an iconic Vietnam War photo of a naked girl escaping a napalm bombing, after Norwegian Prime Minister Erna Solberg led a protest and called on it to review its editing policy.

And Gustavson said his incident was not the first time that burns victims' pictures had been taken down.

“It has happened before that a Facebook friend's picture was censored, in a group called Burning Spirit. Those of us in that group immediately posted pictures of our burned hands, because they had censored a picture of her hands,” he said.

“So I was not completely surprised, but obviously still think it is insensitive, wrong and could be offensive, particularly to someone who is perhaps recently injured and has mustered their courage to post a picture in a nice context and then it is removed without further explanation.”