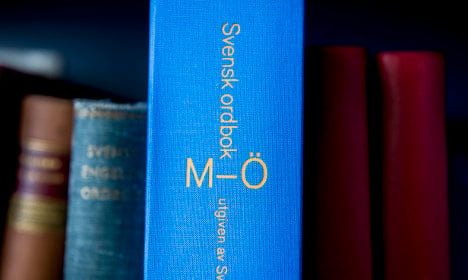 Learning a foreign language is a satisfying experience, but it can also be an embarrassing one once the immersion in the new tongue really starts to take hold. As native English speakers will tell you, going back home to visit after months of speaking mostly Swedish can cause some rather awkward language issues that you probably won’t even notice until someone looks at you in an odd way. Here are just a few ways learning Swedish can mess up your English…

Expressing surprise in Swedish is often as simple as uttering the briefest of sounds – “oj”. Unfortunately, if you do it enough, the noise can start to invade your English. To the point where reacting to something marginally shocking in your mother tongue provokes an exclamation which, to an English speaker, makes you sound something like a stereotype of an angry cockney trying to get someone’s attention.

Come to think of it, it’s incredible that more Swedish actors haven’t been cast in Eastenders. They already have 99 percent of the dialogue down. 2. We shall not bathe

You go on holiday with some old friends from back home. It’s a sunny day. You decide to go to the beach. “Shall we bathe?” you ask them, innocently. “Are you from the 1930s?”, they reply.

Technically there’s nothing wrong with your instinctive, literal translation of the Swedish phrase (“ska vi bada?”), but it sure does sound weird. Too cold (and by now too embarrassed) to “bathe”. Photo: Berit Roald/NTB Scanpix

For a small country Sweden has its fair share of well known international brands, but while Ikea and H&M are household names in places like the UK, they're pronounced significantly differently from the original Swedish.

So when you explain to your mum that you bought your cabinet from “eekeea”, she’ll have no idea what you’re talking about. And your friend now thinks you got your pretty average looking hoodie from some cool Swedish designer called “haw em”. Little do they know… For Brits and Americans, speaking Swedish means getting used to using the metric system more frequently, something that can feel particularly unnatural when it comes to measuring distance.

Though that’s not strictly a language issue to begin with, after a while it becomes second nature and does eventually seep into how you speak, leading to Skype chats where your folks back home are left none the wiser after asking the simple question of how far it was when you drove from Stockholm to Gothenburg last weekend.

468 kilometers, you tell them. And they’ll smile politely, vaguely aware that they learned kilometers in school but have long since forgotten it since no one uses them anyway, but they're too embarrassed to ask you to put it into miles instead. This charade can continue forever. Remember, this means nothing to them. Photo: Adam Ihse/TT

Nailing the correct word order is often one of the bigger challenges for English speakers learning Swedish, but once you have it mastered there's the whole new problem of potentially getting things the wrong way around when reverting to speaking your native tongue.

Which is why I told someone yesterday that I couldn’t get them a ticket for a concert because it was “outsold” (instead of sold out). And I’m also guilty of occasionally asking people if they want “one cup of coffee more” instead of “one more cup of coffee”. The latter example just about passes in English, but I definitely wouldn't have said it that way before I learned Swedish. Some Swedish guy at his outsold concert in Gothenburg. Photo: Adam Ihse/TT

6. Using Swedish words when you can't think of an English one

How do you invite someone for fika without inviting them for, well, “fika”? It’s a dilemma people with English as a first language who have lived in Sweden face all the time. “Invite them for coffee”, you may suggest, but that phrase doesn’t explicitly cover the absolute certainty that buns or something else sugary and bad for you will be involved, does it?

Unfortunately, resorting to using Swedish words in the middle of an English sentence when you can’t find a suitable one in the latter language is a luxury only possible while in Sweden, as quickly becomes apparent when returning home. Fika: what else can you call coffee, a bun, and minimal social interaction? Photo: Jessica Gow/TT

“Ah” is not an appropriate way to acknowledge that you’re still listening to someone in English, but after a few years of speaking Swedish, it sure is a hard habit to shake. Unfortunately, the other person now thinks you're in pain. As The Local reader Tanja Swe pointed out on Facebook, forgetting the end of words that are similar in Swedish and English can be a slightly odd consequence of speaking both languages. So suddenly, you find yourself saying “exact” or “absolute”, forgetting all about that “ly” at the end.

It's not a big enough change that the other person won't understand what you mean, but in all likelihood they now think you're stupid. It worked for the vodka, it won’t work for you. Photo: Janerik Henriksson/TT

Any Scottish readers out there may be familiar with the unique problem of suddenly mixing a lot of Scots words into your English after learning Swedish, despite rarely if ever using the Scottish terms before you moved.

So all of a sudden, you’re “foo”, not drunk. Or you’re going to see your brother’s “bairn”, not his kid. And life is now “braw”, of course. But when you’re on a weekend trip to London, keep in mind they won’t have a clue what you mean when you say the drinks are “dear”, even if it worked equally well in Stockholm as it did in Glasgow. Universally accepted by you and your Swedish friends as a method of getting foo. Photo: Hasse Holmberg/TT

Here’s a closing tip: when your friends are visiting Stockholm, don’t tell them you’re all going out to meet some people for an “after work”, they'll only be perplexed by the specificity.

And definitely don’t hastily translate at the door by asking them to show their “leg” to the bouncer. It could get awkward. Showing this won’t get your friends into a bar in Stockholm. Or at least not most of them. Photo: Fredrik Sandberg/TT