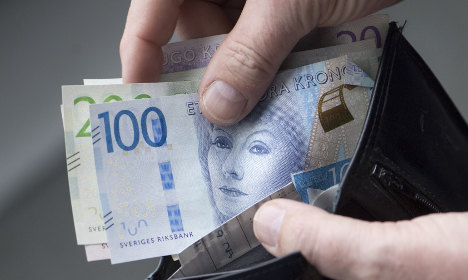 File photo not related to the article. Photo: Fredrik Sandberg/TT

The organization took in the views of 1000 Swedes as part of a major international report, the Global Corruption Barometer 2016, which covered 42 countries in Europe and Asia.

The overall conclusion was that Swedes along with Germans are the citizens who think their countries do best when it comes to issues of corruption, and Sweden in particular was the country least likely to give its government a negative rating on its anti-corruption efforts.

There were however a number of areas where Swedes did not have a great deal of faith. Only eight percent said they have full confidence in business leaders, while 17 percent said the same for local politicians.

The corresponding percentage of Swedes with full confidence in the Prime Minister and Government Offices was 42 percent by comparison. For MPs it was 22 percent, and for the judiciary, 40 percent.

Over half of the Swedes surveyed said they want to ban private companies from donating to political parties.

A third of those surveyed in Sweden think that whistle-blowing is the best deterrent against corruption meanwhile, but just as many believe that people refrain from disclosing abuses out of fear of reprisals.

Transparency International identified the interface between Sweden’s public and private sectors, where there are large and complex tender procedures, as the biggest risk area for corruption in the country.