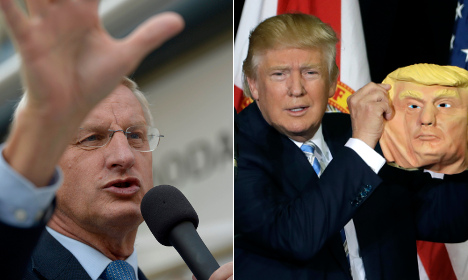 “It is only with effort that the leaders of Europe have managed to compose themselves after the US election, torn between pure shock over the result and the necessity of preserving what can be preserved of the West and the Atlantic relationship,” writes Bildt, who was Sweden's foreign minister 2006-2014 and prime minister 1991-1994, in an opinion piece published by US newspaper the Washington Post.

“If you listen to what Donald Trump has been saying during and before his campaign, this is the end of the West as we know it,” he adds.

The election of Trump as the next US president has sent jitters through Sweden and Europe, with several high-profile politicians raising concern over the Republican's comments on Nato, climate change, Muslims and ethnic minorities, and the United States' relations with the European Union.

Bildt, a former party leader of Sweden's centre-right Moderates and prolific tweeter, urged his Twitter followers on the day after the election to fasten their seatbelts, saying the world was “entering unchartered territory”. A week later, he suggests recent actions by the president-elect have not diminished his concerns.

“When Trump receives the jubilant British anti-Europe campaigner Nigel Farage before seeing other foreign politicians, he is sending the worst possible signal to Europe. By design or by default, he transmits a signal of support to those dark forces in various countries trying to undo what generations of US and European statesmen have worked to achieve.”

If Trump now wanted to look statesmanlike to Europe, receiving Farage was probably the worst thing he could to. pic.twitter.com/DSH2LzuN6I

He goes on to warn that if Trump caves in to Russian leader Vladimir Putin on security policies in the Ukraine, it could be the start of a destabilization of geopolitics with an impact beyond Europe.

Finally, he argues that it would be in the business interest of free-trade sceptic Trump to make transatlantic deals with the West rather than China. Much of Sweden's economy depends on international trade, with many experts arguing that a slow-down of globalization could have significantly negative effects.

Bildt adds: “Henry Kissinger noted shortly before the election that 'for the first time since the end of the Second World War, the future relationship of America to the world is not fully settled'. From the European point of view, that is a big understatement.”