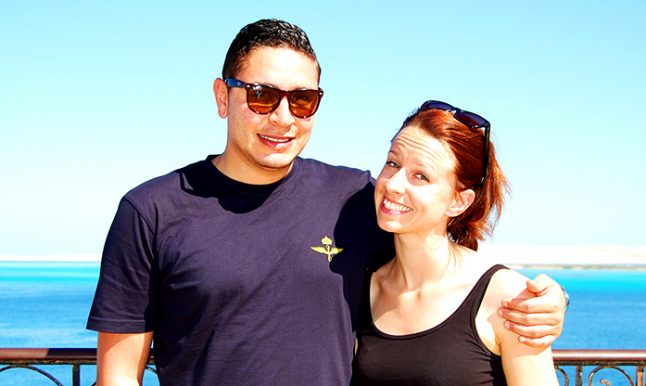 Mohammed Elsawi, 30, met his 29-year-old Swedish girlfriend Louise when they were both working in the tourism industry in the Egyptian coastal resort of Hurghada back in 2011.

The pair soon fell in love and moved in together in Egypt, but the fact that Louise was a seasonal worker meant they had to spend months apart in the early stages of their relationship.

When she returned in 2012, their feelings for each other remained as strong as before and they began to make plans for a future together. But did that future lie in Egypt or Sweden?

With Louise already struggling to cope with scorching temperatures and the challenges of communicating in Arabic, another circumstance pushed the pendulum further in Sweden’s favour: she had been offered a job back home.

The lure of a permanent contract was “a game changer”, Elsawi says. So he applied for a visa, packed his bags, and headed for Sweden.

“Soon after arriving, I figured out that Sweden is a totally different world in almost every respect.”

He knew that Louise had experienced culture shock in Egypt. Now he knew what it felt like.

“The people are different, the streets are different, buses, trees, flowers, behaviour, rules and the language. Nothing seemed normal compared to what life was like in Egypt.”

Figuring out how it all worked was like poring over the manual for “a very advanced computer”, he added. “I wanted to have friends; it's a necessity, but making friends is a real issue in Sweden.”

His two main challenges were learning the language and trying to get to know Swedes.

“In Egypt it was so easy to make friends; it’s not unusual to see people hugging each other, and exchanging phone numbers after a quick chat on a bus for example. This doesn’t happen here,” he said.

One encounter in particular sticks in his mind.

“I was drinking in a club and ended up having a long discussion with a Swede. I told him about my previous and current life, and he told me about his too. We exchanged so many details in a very amiable discussion until it got late. Then we said ‘bye’, and I left the club.”

Some time later, he bumped into the same Swede once again.

“I was pleased, smiled, and felt the urge to say ‘hi’. I ran towards him and tried to shake hands, but he seemed stunned and shocked,” Elsawi recalled.

“He said: ‘Sorry! I think we talked to each other before, but I still don’t know who you are. I don’t even know your second name, and you don’t know mine’.”

Elsawi says he felt the cultural dissonance “like an electric shock”. He thought about how he had inadvertently made this stranger feel uncomfortable.

“After that, it was clear to me that socializing with people in this country using the Egyptian way was impractical. The best way to build relations within the community is by using their language, and that’s what I have been doing recently. Now I have a few friends, but still not many,” he said.

While he was trying to integrate into Swedish society, he heard about the many initiatives and programmes which have been set up to match newcomers with locals and Sweden. It was a completely foreign concept to Elsawi.

“I'd apply to a piano course to learn how to play music. But signing up to a programme or a course to make friends or learn how to meet people doesn't seem genuine to me.”

He still hasn't gotten over the culture shock or differences in social interaction – but there's one very big silver lining: Louise, his best friend and mother of his baby.

“Despite all the nagging and grumbling, I can’t be any happier than when I’m with Louise,” smiled Elsawi.

“I don’t have many Swedish friends, but at the end of the day, the loves of my life are two Swedes, Louise my girlfriend, and Lucy, our first baby who was born a few days ago. I feel blessed and I couldn’t be any happier than this.”