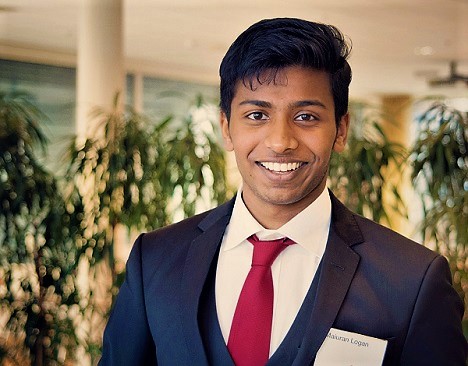 “It’s a reservoir of benefits which I can blend. It’s not like I’m sometimes one or the other,” he explains.

But it’s his roots in the two cultures – and the chasm between them – which has led the 18-year-old entrepreneur to where he is today.

“I’m born and raised in Norway, and if I hadn’t been, my life would have been very different,” Maiuran says.

Maiuran's father applied to study abroad back when the war broke out in his home country in 1987.

“He applied to several countries, and finally was accepted to study in Norway. And when the situation did not improve in Sri Lanka, he had to apply for asylum.”

He knows that he’s lucky his parents were able to settle in Norway and that he was born with more opportunities than he otherwise would have been.

“In Sri Lanka you don’t have the same opportunities that you do I Norway, or in many other countries. And that seems unfair.”

He wanted to change that. Two years ago in his high school entrepreneurship class – that’s a perfectly ordinary elective class in Norway – Maiuran and a few classmates decided that there should be a “Facebook for education”.

The company has stagnated in the developmental stage, as the team viewed it as a side project until they graduated high school. But even then it had inspired confidence in plenty of bigger companies, with a promising future.

“We’ve had pro bono help from a lot of companies here in Oslo. A big law firm gives us free legal advice and Microsoft has helped us out with some other services,” Maiuran says.

Over the summer Maiuran was forced to realize that the Ediphy team did not all have the same vision, and after several months the company was finally discontinued.

“It's been a tough but necessary decision, and I am now happy to start work on a new company that will go back to the very roots of why Ediphy started with a much better concept,” he tells The Local.

But an education startup, and all the growing pains it comes with, isn’t the only iron the multi-tasking young man has in the fire. He’s not discouraged.

This autumn he began studies at the Minerva School in San Francisco. At least that’s where the programme begins – but the four-year degree will lead him to seven different countries.

And on top of that he recently created Young Sustainable Impact. If you haven't heard of it yet, you soon will.

“It started in October after the Paris Conference,” he tells The Local. “There were a lot of great political leaders there discussing it – but not creating solutions that had a real impact. So we decided to start our own conference.” YSI, as it’s called for short, is a platform giving young entrepreneurs the resources to tackle “and solve” the UN Sustainable Development Goals, whether in a specific community or on a larger scale.

“Our first conference ended in early July. We had invited 20 entrepreneurs under age 20 from 16 countries, from Canada to Pakistan,” he says.  “By the end of the week we had four real business models, and potential investments. Three of the ideas are being developed as we speak.”

Maiuran adds that it’s critical to get young people involved in the decision-making process – since they’re the ones who will live with the consequences.

“We’re not spectators. We should be creating solutions for our own future.”

He also muses that people tend to have more of a risk-taking spirit, more of an entrepreneurial drive, when they’re younger – and that it’s needed in order to create real change.

“We need to take some risks to develop a real solution, not just debate things over and over again,” he says.

Maiuran himself has always had that kind of drive. He wants to leave his mark on the world – do something to truly make it better.

“Entrepreneurship has always seemed like the best way for me to create something that has a real impact,” he explains. “I want to create a legacy, not just live for the sake of living. I feel like there’s more to it than that.”

Of course, Maiuran was lucky enough to be born and raised in a culture that supports that dream – and he says it has inevitably shaped him and the way he runs his business.

“In Norway, in Scandinavia, we value entrepreneurship in a different way,” he remarks.

“The Scandinavian model means we have equal pay, a flat hierarchy, and an organization model focused around values rather than the product. And that has shaped the values and priorities of Ediphy as well. If we had started it in Silicon Valley, it would be a different company.”

At Nordic companies everyone is pretty much on the same level – whether CEO or programmer. And that structure is imperative, he adds. The concept of Ediphy is innately Nordic.

“Ediphy is based upon the flat model. It’s about having equality and equal connections across the world, despite geographical locations or other differences.”

Not only is everyone on the same page in a Nordic company, he says, but everyone is given equal opportunities to succeed.

“Our mindset is ‘alle skal med’ – everyone should join,” he clarifies. “There are no elite schools. No top-down approaches. And innovation is encouraged.”

The startup and entrepreneurship community in Oslo is booming, he adds, and even big established companies find it natural to help the newbies out along the way.

“Entrepreneurship has really blossomed here. It’s a value that I’ve grown up with.”

“Tony Stark from Iron Man is my role model,” he confesses. “The drive and passion he has, along with his naïve, positive approach to any challenge and to life in general…that’s my ideal.”

This article was produced by The Local and sponsored by the Nordic Council of Ministers.