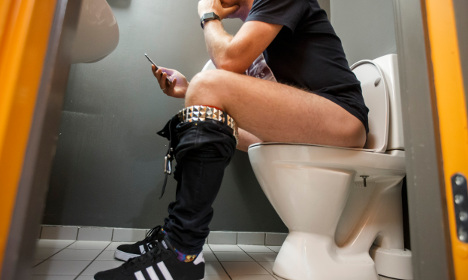 A man on the toilet. Photo: Heiko Junge/NTB scanpix/TT

There are few things more Swedish than their moist tobacco: snus. Placed under the lip rather than smoked, its widespread use is a bit of an oddity due to a ban preventing it from being sold in the rest of the EU.

But what happens to the snus after it's been, well, snus-ed?

The Swedish Water and Wastewater Association (SWWA) has tried to find out, in a study published ahead of the UN World Toilet Day on November 19th.

It found that Swedes flush around four million of their tiny little bags of snus down their toilets every day. That is 1.4 billion portions every year, which corresponds to 1100 tonnes or 100 normal-sized truck loads.

To put it into perspective: Sweden has a population just short of ten million.

Another fun fact: If you put all these portions side by side, they would reach from Sweden to Australia. Around 22 percent of adult males and five percent of females use snus ('snusar') every now and then or every day, according to Swedish Match. More than a million use snus on a regular basis.

More than half of snus users (53 percent) do not know that the tobacco is harmful for the environment if it is flushed down the toilet, the main point of the survey conducted by YouGov on behalf of SWWA.

It should be disposed of as combustible waste, but the reason most people do not throw it in the bin is because there is none nearby (37 percent) or they are worried that it might stink (19 percent). In fact, one in five Swedes has argued with their partner about where to throw away their snus.

“There is a lack of knowledge and behaviour that we want to change. The most important thing is that a changed behaviour when it comes to flushed snus perhaps also leads to people refraining from 'rogue flushing' other things that don't belong in the toilet either,” read an actual comment by SWWA chief executive Anna Linusson in a press statement.

The survey was based on online interviews from August 12th-23rd with 512 men and women aged 18 or older.