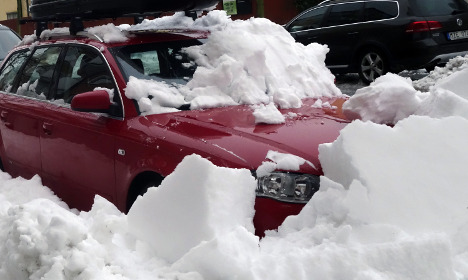 Stockholm's Liberal councillors argue that the city needs to think outside of the box if it is going to avoid a repeat, and have now suggested the answer could be allowing the unemployed, students and pensioners to sign up to be drafted in at short notice to clear the snow away and keep the city moving.

The Liberals' transport policy spokesperson in the city, Patrik Silverudd, has written to Stockholm City Council’s traffic committee with his suggestion.

“If there is something positive to emerge from the snow chaos of recent weeks it is the enormous willingness to help that Stockholmers have shown. But if we need to rely on voluntary efforts to shovel up after major snow we are on the wrong track. We need to strengthen both crisis management and the ability to mobilize quickly during heavy snowfall,” Silverudd argued in a press release.

The traffic chaos caused by the bad weather last week appeared to catch the Swedish capital off guard. That led to criticisms of the efforts to clear the snow, with the municipal government’s ‘gender-equal’ snow-clearing policy of clearing pavements and cycle lanes before roads being targeted in some quarters.

Silverudd thinks that strength in numbers would counteract winter weather issues, while at the same time also helping those who are out of work or looking to earn extra money.

“We have to be well prepared for snow clearing during the winter half of the year. That’s the top priority. But we also want to look at smart ways to take people in through ‘flash jobs’ (temporary jobs where people can be called into work at short notice),” the Liberal politician explained.

“It could be for example that when there is a lot of snow, people can register to clear bus stops, or help shovel out cars that are stuck. It could suit for example students who want to earn extra money.”

A similar ‘flash job’ system is already used by charity Stockholm Stadsmission (Stockholm City Mission), which calls people in to work in areas like cleaning, gardening and moving.

Silverudd thinks that Stockholm Municipality could create temporary winter jobs similar to the temporary summer workers it already makes use of, and allow 200-300 people to sign up for work during bad snowfall.

While there are still some small remnants of this month’s bad heavy snowfall lying on the ground in Stockholm, the city won’t be asked to tackle the problem again in the immediate future. This weekend is predicted to be a sunny one, and temperatures could  reach as high as eight degrees in the forthcoming week, according to national forecaster SMHI.