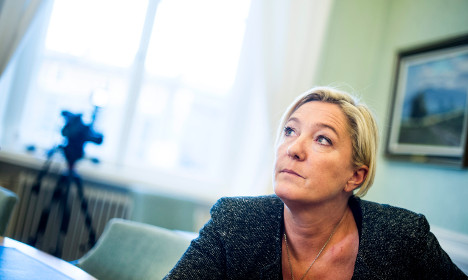 SD won two seats in the 2014 EU elections. Yet despite originally supporting pan-European far-right group European Alliance for Freedom (EAF) alongside France's National Front during the campaign, they switched after the election to instead enter a formal alliance with Nigel Farage’s Ukip in the Europe of Freedom and Democracy (EFD) group.

That meant Le Pen could not form the group in the EU Parliament that she had planned on, as it needed more members. And the move remains a sore point.

“For me that is still… a very big question mark. We had a relationship with the Sweden Democrats,” Le Pen said in an interview with Swedish newspaper Dagens Nyheter.

“We were invited to Sweden by their chairman, we were together in a European political party, and during the previous mandate period we had a very good relationship with their leader (Jimmie Åkesson),” she added.

Ukip’s acceptance of SD into its European Parliament group helped to give the Swedish party with fascist roots greater credibility and acceptance.

SD still work alongside Ukip in the present day as part of Europe of Freedom and Direct Democracy (EFDD).

France’s Front National meanwhile had to wait until 2015 for their new European parliamentary group, the Europe of Nations and Freedom, to begin working in the European Parliament.

“I think it was a mistake,” Le Pen insisted, referring to SD’s maneuver.