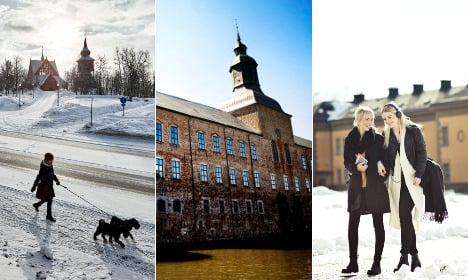 “Not Stockholm again,” you're perhaps thinking. Yes, Stockholm again. Not only do 59 percent of Stockholmers themselves describe their own city as beautiful, according to another survey this year, but so does Allt om Resor, raving about the cobbled streets of Gamla Stan and the stunning archipelago. This is one of The Local's favourite places in Sweden. Visby is a Unesco World Heritage site and is one of the best preserved medieval towns in Scandinavia. In summer, the island of Gotland has beaches that make you think you're in the Caribbean – but we recommend a winter visit too to avoid the crowds. Visby on the island of Gotland. Photo: Emma Löfgren/The Local

“Visiting wooden town Nora is like stepping inside a museum,” writes Allt om Resor. Located some 25 kilometres north of Örebro in central Sweden, it is a two-leg train journey from Stockholm which takes around two and a half hours. Nora is one of Sweden's best preserved wooden towns, so if you like the idea of the iconic Swedish wooden houses, this one's for you. This southern Swedish 11th-century town ended up on a The Local list of Sweden's cutest hidden gems last year. It is the home of Swedish author Henning Mankell's fictional detective Kurt Wallander and the TV adaptations, both the Swedish original and Kenneth Branagh's BBC version, were shot on location. Vadstena is best known for its 14th-century abbey, which was founded by Swedish Saint Bridget (Den Heliga Birgitta). It also boasts Sweden's best preserved town hall, from the 15th century, and Vadstena Castle, built in the mid-1500s as a defensive fortress to fend off the Danes. This central Swedish town, only an hour away from Stockholm, is not only very pretty – it is also the place of Sweden's best café of the year, at least according to the White Guide 2016 ranking. Or, as Allt om Resor writes: “In Mariefred it is easy to live la dolce vita – the sweet life.” Karlskrona is the largest town in Blekinge archipelago – which was recently voted one of the most beautiful places in Sweden in another survey – and the capital of Blekinge county. It was founded in 1680 when the Swedish Navy relocated from Stockholm in search of a more strategic location further south to stop those pesky Danes invading the southern Swedish regions again. Geographically, Östersund is Sweden's most central town. It is located in the picturesque Jämtland province, right next to the lake Storsjön, and is a popular place for hill walkers. But Allt om Resor also points out that it is a vibrant creative town with plenty of music events year round.

Helsingborg in southern Sweden often ends up in the shadow of either its big brother Malmö or the smaller villages nearby. But as Allt om Resor argues, it's got “everything you can ask from a town: beautiful nature, good restaurants, castles, gardens and a view of the [Öresund] strait”. Kalmar in south-eastern Sweden was voted the country's top summer destination earlier this year. It is not bad in winter either, with Kalmar Castle being the obvious tourist attraction, which hosts a Christmas fair every year filled with more than 120 craftspeople selling their products. Halmstad, on the south-western coast of Sweden, is another popular summer destination that many don't think to visit in winter. But you definitely should. It is a great town for foodies, with several restaurants and butcher shops offering unique local produce – perfect for Christmas. Not to mention that the county Halland was voted Sweden's most beautiful county this year (by the Hallanders themselves, but still). Halmstad and the River Nissan in winter. Photo: Guillaume Baviere/Flickr

What happens when an entire town is knocked down and relocated? If you live in Kiruna, you know. The huge project will see thousands of homes and businesses knocked down and moved three kilometres east, due to safety concerns over mining beneath the town. Most visitors come here to go hiking, skiing, experience the Midnight Sun (in summer) or Northern Lights (winter).