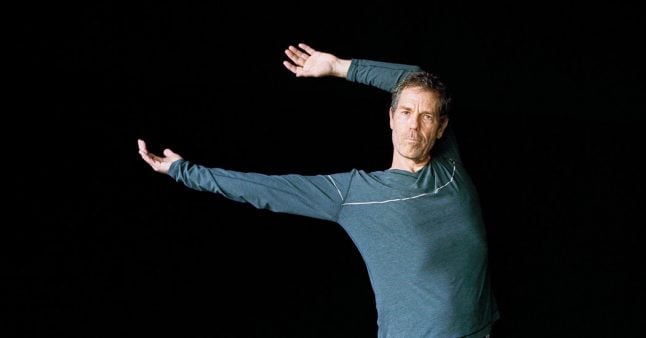 On a dreary grey November day, dozens of people gathered in a little room at Kulturhuset in downtown Stockholm. They were all there for the chance to meet Mr. Gaga.

Israeli dancer and choreographer Ohad Naharin has become famous for his work in New York as well as his direction the Batsheva Dance Company. After an injury, he began to listen to his body more when he danced, and developed his own style of contemporary dance and “movement language” which he calls Gaga.

As a regular visitor to Sweden’s capital, Ohad Naharin came to share Gaga with all those who were interested.

But Ohad Naharin’s philosophy is relevant for far more than dance. We decided to share a few of his words from the event to inspire you – to dance or to live.

“How are you?” Ohad Naharin echoes after the moderator poses the question, opening a Q&A session at Kulturhuset. “That’s the hardest question.”

Ohad is enigmatic, quiet, composed, but full of an energy that glows just under the surface. With his dancers he is firm, strict – and yet even when is angered, he doesn’t lose control.

He’s in his 60s now, and he confesses that he was angry more often when he was young.

But he doesn’t strike the audience as a sad person. He’s refined and friendly with a keen sense of humour – and a fascinating philosophy on life.

“I forbid my dancers, and my daughter, from using the word ‘most’,” he tells the moderator when asked what he thinks is the most important part of dancing.

“If you say you know the ‘most’ something than you pretend that you know everything,” he explains. “But you know so little.”

For Ohad, dancing and performing are two different things. While he directs dancers for performing on stage, he says that anyone can – and should – dance.

“Dancing is listening to your body before you tell it what to do. It’s delicacy, energy, our animal instincts,” he says. “And one of the most important things – if we use that word – is to listen to the effects of gravity.”

What happens if you lift your hand feel the weight of it in the air? Do you feel it in your arm, in your shoulder, in your back? Each of your fingers has its own weight – be conscious and feel that weight.

“Feeling gravity is a habit, and it creates a flowing quality instead of blockage of energy,” Ohad says. It’s a statement that applies not just to dance, but life.

“Blockage can create poor nutrition, injury, and block your happiness. We need balance,” Ohad says. ”We have to listen to the body, how it feels, not how it looks.”

Ohad Naharin started dancing when he was 22. For some that might seem late – many dancers begin their studies as children. But Ohad says he started right on time.

“It’s only late because we think it’s late. But for me the timing was just right.”

Ohad was drawn to dance by the beauty of movement in general, how movement and pleasure are connected, and curiosity about how we move our bodies.

As a dance director and choreographer he is curious as well, and encourages his dancers to offer him something he did not think of.

“I am satisfied when a dancer offers me something I did not write,” he says. “I never ask dancers to lose control, but I believe in the freedom you can find by pushing beyond your limits and finding something new. I teach my dancers not to be limited to their vocabulary, but to show their fantasies.”

That concept is the foundation of his Gaga dance movement. When Ohad dances and teaches gaga, he is not in the center of the room, and there are no mirrors.

“We share a philosophy and we work together,” he says. “There is no obligation to look at the teacher. But we don’t allow mirrors in our dance; it’s a mistake. Mirrors don’t belong in dance.”

It’s a common mistake, he adds. Many dancers only dance in studios full of mirrors, thinking it will help them in their precision.

“Mirrors are disturbing to the feeling and sensation in your dance and you get distracted by that. This isn’t an opinion, it’s a fact,” he states. “Just think about it. Our eyes are in our head, not on our finger tips. We’re supposed to see the world through our eyes, not through looking at ourselves from outside. Dance is the same way. You need to feel, not focus on how it looks.”

To dance Gaga, people need to come with an open mind – and the ability to laugh at themselves. After that, who knows where it could lead.

“I give students at toolbox, and then they can use it to show me something I didn’t know existed,” Ohad says.

In Ohad’s own personal example, he used dance when he was younger to transform negative feelings, political anger, into something beautiful and positive.

“A big part of Gaga is giving up old ideas and making way for new, bigger ones.”