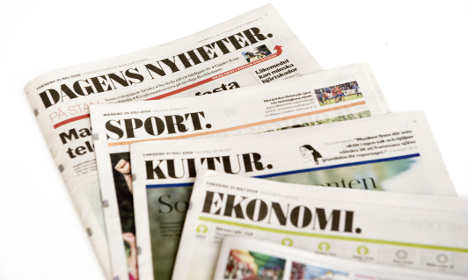 A speech bubble placed above the two politicians in the Dagens Nyheter (DN) drawing says “Finally!” in Swedish (“Äntligen”).

An image of the cartoon started to spread on Twitter over Sunday and Monday. Journalist Annika H Rothstein called it “anti-Semitic”, as did Swedish writer Rebecca Weidmo Uvell.

When Weidmo Uvell sent a tweet to a DN account asking “how can you publish clearly anti-Semitic propaganda? Jews carrying Trump together with the KKK? Please explain,” the account replied “Netanyahu has celebrated Trump’s victory despite Trump’s rhetoric and the enthusiastic support he has received in the USA from the white power movement”.

“That is among the weakest arguments I have seen. The cartoon would have made Hillersberg blush. That says a lot,” responded Göteborgs Posten writer Adam Cwejman. Cwejman was referring to Swedish cartoonist Lars Hillersberg, whose drawings have also been criticized for being anti-Semitic in the past.

At Monday lunchtime however, DN's Editor-in-chief Peter Wolodarski tweeted a statement saying that publishing the cartoon was a mistake.

“Over the years we have published many cartoons in DN that don’t necessarily coincide with the newspaper’s stance. That is the way it should be,” it began.

“The problem with Sunday’s cartoon is that it is open to other interpretations than those intended. For that reason it shouldn’t have been published, even if there is a legitimate political criticism of Trump and Netanyahu at the root.”

The statement insisted though that the cartoon was not anti-Semitic:

“Following the criticism, head of editorial Johannes Åman and I asked historian Henrik Bachner, whose research focuses on anti-Semitism, if he perceives the work to be anti-Semitic. He shares our conclusion that it is not.”

And not everyone who tweeted about the cartoon agreed that the image was supposed to target Jews in general. “Israel is a state. Jews live as individuals in the world. Israel supporting Trump is not tantamount to Jews going so,” argued Left Party MP Karin Rågsjö.

“I'm trying to make a distinction between Israel as a state and Jews as individuals. Trump was supported by Israel,” she added.

DN is a Stockholm-based daily newspaper of independent liberal leaning. Its Editor-in-chief Wolodarski is the son of Polish Jews who moved to Sweden in the 1960s.