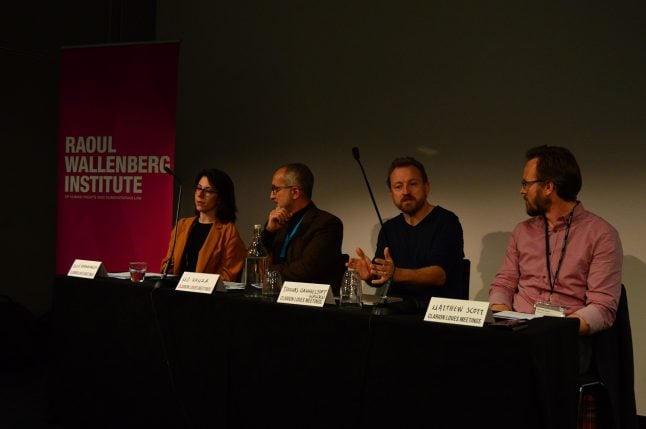 Do you know how to spot SI students at an event? They're usually walking in groups, and holding a bunch of cards and maps in their hands.

This kind of enthusiasm was also present at the latest event where around 19 SI scholarship holders, mainly from Lund University, participated either as visitors or volunteers.

The Human Rights Forum, held in Malmö between 17-19 November, is the largest Scandinavian gathering of different types of human rights organizations, individual activists, NGO’s and representatives from Sweden and the partnering countries and areas.

During three days filled with informative, eye opening, and in some cases, quite emotional panels, participants had a chance to listen to stories from all around the world, learning about successful practices and projects from, not only Sweden, but from other countries as well.

And me? Well, bearing in mind my poor Swedish language skills and the fact that half of my mind is still occupied with the data and stress over my Master’s thesis proposal, I managed to visit English speaking panels and to mingle and talk with people placed all over the conference venue.

Not only did I manage to learn a lot from the panels, deepening my perspectives, but I also had a chance to meet amazing people from different organizations.

For instance, there was Kvinna till Kvinna, Malmö Stad, and not forgetting, of course, the Swedish Institute representative who enabled numerous scholarship holders to visit the Human Rights Forum in the first place.

Needless to say, we visited the SI booth in a group and curiously inspected what’s new and what kind of projects are next in line.

During the three-day event, we had a chance to visit panels which were not only interesting, but also engaging. Some of them, like “The global food system – solution or villain?” – a discussion on how to make the food system consistent with human rights – introduced an entirely new perspective about the right to adequate food.

Did you know that, when it comes to the displacement of people, the majority of them are actually internally displaced because of disaster in their home country?

20 million people were displaced because of disaster during 2015. But during the panel called “What should be done to improve refugee protection?”, Matthew Scoot from the Faculty of Law at Lund University explained that three major factors for displacement of the people are conflicts, disasters and prosecutions, with disasters being the most influential.

As well as the causes, panelists also talked about the challenges refugees face – such as legal issues and xenophobia – all of which need to be changed in order to solve refugee crisis, and enable better protection for refugees.

In addition to the panels, it was fascinating to listen to the experiences different organizations had whilst working with various human rights projects.

Since I used to work in Bosnia and Herzegovina on a project related to minority groups, women rights and discrimination issues, it was extremely valuable for me to see the latest projects of such organizations as Kvinna till Kvinna, and listen to the experiences their partnering organizations from Lebanon and Iraq are having (which they presented during the panel on women refugees).

Even though I had the opportunity to listen to such inspirational stories as those from the Community Monitors project in South Africa, I visited the the panel on women refugees in which Buthainah Mahmood Abbas, from Kvinna till Kvinna’s partner organization in Iraq, told the story about the unfortunate experiences of people who fled from the districts which are under ISIS control.

“To live this type of living is a nightmare,” Buthainah said, explaining that more than 4,000,000 refugees fleeing ISIS have been placed in the refugee camps in Iraq.

I didn’t have a chance to listen all of the panels, but the ones I did manage to visit will stick with me for a long time, not only because of the variety of panels I had a chance to attend, but also because of the inspirational discussions I had with my fellow SI students.

I started my Human Rights Forum experience on a panel in which it was said that the refugee crisis in Europe is real, and ended it with a statement from an Iraqi citizen saying:

“Crisis is not really here; it is where they come from.”