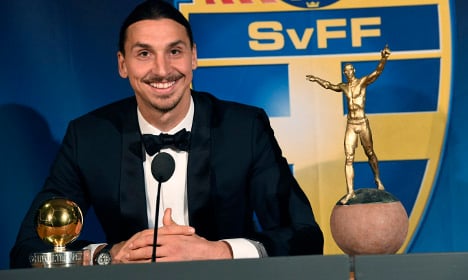 The real Ibrahimovic with a scale model of his new statue. Photo: Jonas Ekströmer/TT

The news was revealed when Ibrahimovic collected his 11th Golden Ball (‘Guldbollen’) award as Sweden’s player of the year in Stockholm. “The guy from Rosengård is getting his own statue in the capital,” he beamed during his acceptance speech at the gala, referring to the Malmö district where he grew up.

The statue, which will be placed outside the Friends Arena stadium in Stockholm, will stand 2.7 metres tall and depict Ibrahimovic wearing nothing but a pair of shorts while walking on a globe. The golden-bronze work is being done by Swedish sculptor Peter Linde and is expected to be finished within a year.

“I think we are generally a bit bad at drawing attention to our sports people in Sweden. Look abroad: there’s a statue of a footballer outside every stadium in England for example. I want to be part of changing that. Zlatan is after all, in my opinion, Sweden’s biggest sports person ever,” commented Swedish Football Association general secretary Håkan Sjöstrand in a press release.

In an interview with Aftonbladet, Ibrahimovic expressed his happiness over the new artwork.

“It feels unbelievably big. I’ll be gone one day, but the statue will be there forever unless someone steals it. But that’ll be difficult because it’s four times as big as me, or in any case a lot bigger,” he observed.

VIDEO: Here's a look at the work in progress

Not everyone is thrilled with the news however. The Friends Arena is also home to Stockholm club side AIK, Sweden’s third most successful team and a rival of Ibrahimovic’s boyhood side Malmö FF.

Many AIK fans have complained about the news on supporter forum Svartgul, with several pointing out that the club just recently had their own statue of founder Isidor Behrens approved, and now a giant Zlatan could end up towering over it.

Typically outspoken, Ibrahimovic hasn’t done much to soften the blow.

“Thinking about how it’s thanks to me that this arena lives, they should change the name to Zlatan. And I’m not joking, I’m serious. I believe I’ve scored the most goals there despite the clubs that play there. I haven’t checked it, but it wouldn’t surprise me,” he bragged to Aftonbladet.

A meme from a parody account depicting an exaggeratedly giant Ibrahimovic has also started to spread on Twitter.

It has not yet been decided exactly where in the area around the Friends Arena that the statue will be placed.