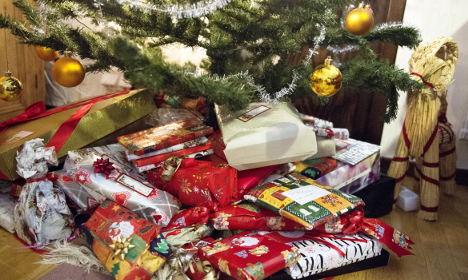 Sweden's Christmas gift of the year has been revealed. Photo: Bertil Enevåg Ericson/TT

“2016 is the year when the line between fiction and reality is blurred,” Michael Cronholm of HUI Research said at the annual press conference announcing the winner, a pair of Virtual Reality (VR) glasses.

“They can be used at the doctor's, in shops and even companies can benefit from the technology,” he added.

The criteria for Sweden's Christmas gift of the year ('årets julklapp') are that it must be trendy, a hot seller and represent the times in which we live, according to the institute.

Last year the robotic vacuum cleaner claimed the top spot, and in 2013 the juice extractor helped keep the Scandinavians healthy and full of vitamins during the holiday season. After a turbulent year for the world, when 'post-truth' became the word of the year, the irony of a pair of virtual reality glasses was not lost on the Swedes.

“Christmas present of the year after a year of much misery in the world are VR glasses. If only it were possible to think of a joke about that,” tweeted one Swede.

“Wonder if they'll end up in the wardrobe next to the juice maker and the acupressure mat,” mused another who did not believe the techy glasses would end up the most prized possession of every Svensson.

2016 marks the 29th consecutive year that the institute has published its prediction for the gift most likely to be snapped up from the shelves by keen shoppers in the run-up to Christmas.

The tradition began back in 1988 when the baking machine was nominated. Previous winners also include a cookbook, perfume, mobile phone, acupressure mat and an electronic pet.