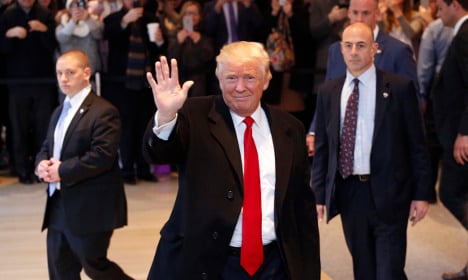 When tabloid Aftonbladet was given permission to see a copy of the letter by Sweden’s government offices the middle section had been censored however, leaving some of Löfven’s message for Trump a mystery.

“On behalf of the Swedish Government, I congratulate you upon your election as President of the United States of America,” the letter begins.

“Sweden values the broad collaboration between our countries. Our longstanding relations date long back in time and are built on mutual interests,” it continues.

Two large sections which follow are blacked out, with the next visible part the closing paragraph, which reads:

“I hope that Sweden and the United States can continue building on the broad and extensive bilateral relations between our two countries. Yours sincerely, Stefan Löfven.”

According to Aftonbladet, the Swedish government offices said the censored sections could interfere with Sweden’s international relations if they were disclosed.

A similar explanation was given earlier in November, when Sweden’s foreign ministry sent Aftonbladet copies of two reports the country’s embassy in Washington D.C compiled on how the election of each of the two main 2016 US presidential candidates would impact relations with Sweden.

Many sections were censored in order to avoid “disrupting Sweden's relationship with another state”, but far more of the sections on Trump were masked than those on Clinton.

In contrast to the letter PM Löfven sent to Trump this month, the one former Swedish PM Fredrik Reinfeldt sent to Barack Obama after the latter's re-election in 2012 was published in its entirety.

Löfven only revealed on Wednesday evening that he had spoken to Trump, despite neighbouring Denmark’s Prime Minister Lars Løkke Rasmussen having a phone conversation with the US President-elect soon after the election.