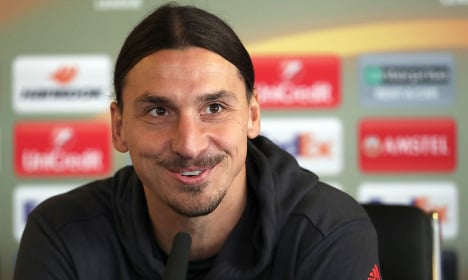 Ibrahimovic, 35, joined United from Paris Saint-Germain in July on a one-year contract with an option for an extra year.

“Zlatan's situation is simple,” Mourinho told reporters at Old Trafford ahead of United's Europa League meeting with Feyenoord on Thursday.

“He has one plus one. We are happy with him. We are going to execute the option of a second season. After that he can do what he wants.”

Mourinho previously spent a season working with Ibrahimovic at Inter Milan, where the pair won the 2008-09 Serie A title together.

Ibrahimovic, appearing at the same press conference, said he would be happy to extend his contract if he is still enjoying life at the club.

“The second year goes automatic after one, so that is no work for me and no work for them,” he said.

“It goes automatic after certain things. So, if it continues like this, yes.”

The striker, who has won 11 league titles in four countries, has scored eight goals in his 17 United appearances to date.

The charismatic Swede went off the boil after scoring five goals in his first five games, but recently ended a six-game Premier League scoring drought with a brace in a 3-1 win at Swansea City.

He missed United's 1-1 draw with Arsenal last Saturday through suspension.

Ibrahimovic scored a record 62 goals in 116 appearances for Sweden before retiring from international football after his country's group-stage exit at Euro 2016.

Earlier this week it was announced that a huge semi-naked statue of the record goalscorer will be erected outside of Sweden's national arena in Stockholm.