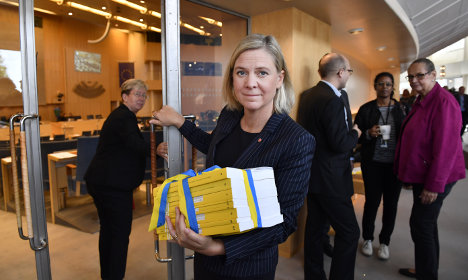 Along with the members of the governing Green-Social Democrat coalition, the budget was backed by 18 Left Party MPs. The Centre Party, Christian Democrats and Liberals all abstained in the final vote.

Sweden’s Finance Minister Magdalena Andersson first presented the government’s proposed 2017 budget in September, with immigration and integration, the environment and gender equality some of the key areas allocated money in the draft.

READ ALSO: Six key points you need to know about the budget

The anti-immigration Sweden Democrats (SD) voted against the minority government’s budget on Wednesday, but with three of the other main parties abstaining as they had previously promised to, there was no danger of a repeat of the crisis which took hold in Sweden when SD voted the same way in 2014.

That winter, SD’s backing meant the centre-right Alliance opposition budget got more support than the government’s, causing a political crisis which even led to plans for a snap election.

A fresh election was eventually avoided however thanks to the so-called December Agreement, a pact designed to leave the SD's vote irrelevant by ensuring that the Alliance parties, Social Democrats or Greens would either not put forward a rival budget or abstain from voting in the future if a government budget looked in danger of falling.

The deal later collapsed, but the four Alliance parties have since chosen to each vote for their own separate budget proposals or abstain, rather than putting forward a common budget proposal.