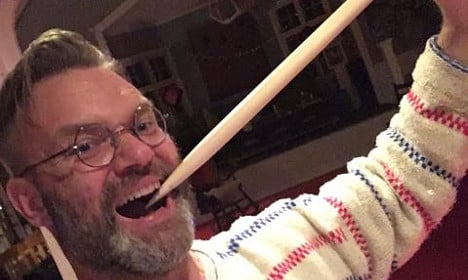 In 2013 The Local wrote about how woodwork teacher Claes Blixt got into the Guinness Book of Records with the world’s biggest butter knife, while last May he followed that with the world’s largest pack of playing cards.

Earlier this week we received a tip-off that Blixt was now plotting a fresh attempt with what could be the world’s biggest toothpick, and after calling the Swede up, he confirmed its veracity.

“I have experience of Guinness world records so I know it’s a long process. Everything has to be done in the right way: you have to send in photos, film, have professional witnesses. All the material is done, so now I’m just waiting to send it off,” Blixt revealed.

Fortunately he doesn’t have to send the toothpick itself anywhere.

“No! I'm not going to send the toothpick itself anywhere. Just the documentation to show I haven’t cheated. You have to follow the guidelines exactly,” the record breaker laughed. As for why Blixt decided to make the world’s biggest toothpick in particular, the unlikely explanation can be found in the US President-elect.

“I like to link my projects to something I enjoy. I made the cards because I play solitaire every day. I sit with a toothpick and fix my teeth every day too, but that wasn’t it,” he began.

“It seems like you can say what you want these days, like Donald Trump. People have big mouths. So I thought there should be a big toothpick for people who need it, people who have big mouths like Trump,” he concluded. It will be several months before the Swede knows whether the toothpick (which is exactly ten times the size of a normal one) really is the biggest in the world. The plan is to put the oversized item to good use once the process is over.

“I sold the butter knife and sent the money to charity. It gave 200 girls in Burkina Faso school lunches for four years. It’s the same idea with the other stuff. It’s important that it goes to good things,” Blixt noted.

Thanks to Christian Olsson, who blogs about the Hidden Wonders of Sweden, for sending in the tip. Do you know of any quirky stories in Sweden? Email us at [email protected].