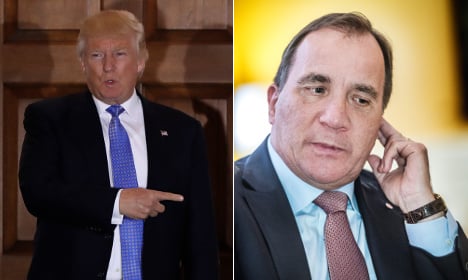 'This is Donald calling Stefan. Are you there Stefan?' Photo: AP Photo/Carolyn Kaster &Tomas Oneborg/SvD/TT

“Prime Minister Stefan Löfven today had a telephone conversation with the US President-elect,” read a press statement issued by Löfven's office on Wednesday evening.

“During the call, the Prime Minister congratulated Donald Trump and stressed the importance of continuing to develop good relations between Sweden and the US. As an example of important areas for cooperation the Prime Minister mentioned trade and job creation, security and climate.”

“Donald Trump expressed a very positive view of Sweden and sees all opportunities for further cooperation. He also invited the Prime Minister to a personal meeting on forthcoming visits to the US.”

The latter is in fact very similar to what Danish Prime Minister Lars Løkke Rasmussen was told in his first phone call from Trump last week.

A press spokesperson described Löfven and Trump's talk to the Aftonbladet tabloid as “brief” but declined to elaborate on what was said, adding “it was a conversation between two leaders”.

She said centre-left Social Democrat leader Löfven, who made clear both before and after the election that he would have preferred Trump's opponent Hillary Clinton to win, did not have any trips to the US planned at the moment.

The details of how Sweden and the US will continue to cooperate on areas where they are now very far apart are unclear.

Trump is a climate-change sceptic – the Green Party is part of Sweden's coalition government. There are signs the US will focus on a more isolationist foreign policy – Sweden is concerned this could open up for increased Russian influence in the Baltics. Trump wants to pull out of free trade deals – Sweden largely depends on international trade.

If you want to read what Löfven wrote to Trump in his congratulatory letter earlier this month, you can do so here – at least the parts that were not censored by his office.