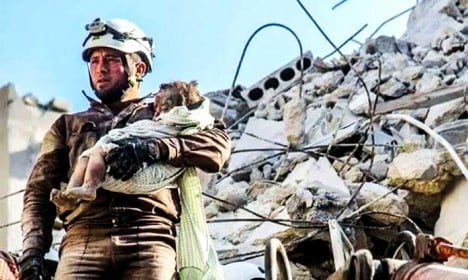 Often dubbed the ‘Alternative Nobel’ prize, the prestigious Right Livelihood Award has this year been awarded to Syria Civil Defence. The group, better known internationally as the White Helmets, has garnered huge praise for its fearless rescue missions in war zones.

But critics also question whether the team might have an ulterior motive, with its alleged hidden allegiances spanning the spectrum from al-Qaeda to Nato.

The head of the White Helmets, Raed al Saleh will pick up the award at a ceremony in Stockholm on Friday. But first he took part in a panel discussion hosted by the Swedish Insitute of International Affairs (Utrikesinstitutet – UI).

'We have pledged to serve all Syrians'

Speaking to the assembled analysts, journalists and other interested parties, Saleh expressed gratitude for the award, which he said would “mean a lot for out volunteers. It will help encourage them and give them hope – a feeling that the world is aware of their bravery and achievements.”

He added: “We adhere to UN conventions and principles, and we have pledged to serve all Syrians regardless of their backgrounds. Now we are mostly operating in the rebel-held areas because they are afflicted by heavy airstrikes on a daily basis – it’s a needs-based operation.”

Bitte Hammargren, an editor and Middle East analyst at the institute, asked Saleh, why they did not run rescue missions in western Aleppo, or other regime-held areas.

Saleh replied: “We are ready to help in any rescue mission even in the regime held-areas, if we were given the permission.”

“We already have a centre in Afrin, a Kurdish-held area, and have just expressed recently to the UN our will to help in dealing with mountain fires in Latakia, which is a regime-held area.”

Saleh stressed the group’s transparency, and noted that the White Helmets get financial support from the US, UK, Germany, and Japan, among other countries. Sweden does not sponsor the White Helmets, and the group has not requested aid from Stockholm.

We're not Nato and we're not terrorists

One of the panelists, Per Jönsson, an associate editor and Middle East expert at UI, cited critics who question the group’s neutrality and impartiality. He noted that $23 million of the $60 million donated to the White Helmets in 2013 came from USAID's Office of Transition Initiatives, a body for “democracy promotion”, or, in the eyes of its critics, “investigating regime change”.

Saleh though insisted that the group’s mission was purely humanitarian, and responded scathingly to any suggestion it was working for the US, Nato, or for any other political groupings either inside or outside of Syria.

“We contacted humanitarian activists all over the world and asked them to support a no-fly zone in Syria. This was done to protect people, and not for any other reason.”

“Japan supports us, and I think Japan is not part of Nato. The US and the UK support the United Nations, as do other Nato members. Does that make the UN a political tool for Nato?”

'We want to help everybody'

The group has also faced questions about its relationship with al-Qaeda affiliates in northern Syria. Saleh said the group had welcomed former fighters who had laid down their weapons. But he added that Syria Civil Defence members filmed holding weapons or flying the flags of terrorist groups “do not represent the organisation’s general principles and humanitarian values,” said Saleh.

“We help all people under the rubble, whoever they are. It’s a humanitarian task and you just can’t see a human being dying under the rubble and ask them before helping them: ‘Who are you aligned with?’

“We want to help everybody,” Saleh said.

READ ALSO: Syria's White Helmets: The Nobel Peace Prize would have meant a lot, but pulling a child from rubble is the greatest reward