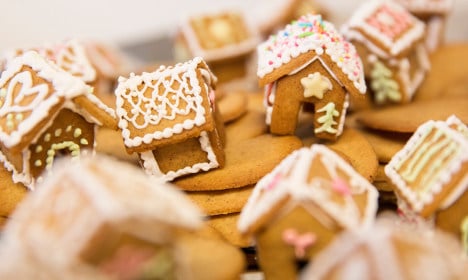 What gingerbread houses could look like. Photo: Tore Meek/NTB scanpix/TT

Total: 60 minutes plus over night standing

1. Mix the sugar, syrup, treacle and butter in a large saucepan. Heat gently until the butter or margarine melts, stirring continuously. Turn off the heat, mix in the spices and milk. Leave to cool.

2. Mix the bicarbonate of soda (baking soda) with 450g (3 ½ cups) of the flour. Add to the saucepan and mix thoroughly to form a firm smooth dough, tipping on to a floured work surface if necessary. Form into a ball and wrap in foil and chill for at least 24 hours.

5. Knead the dough on a floured work surface and then roll it out to a thickness of about two to three millimetres (1/8in). Cut a small test piece out and bake for five minutes. If it spreads out, add more flour to the dough.

6. Line some baking trays (pans) with baking parchment. Lay the rolled out dough on the parchment. Place the templates on the dough, but not too firmly. Cut round the parts. Remove the excess dough, but try not to move the parts as they easily change shape.

7. Bake large parts for 10-15 minutes and small parts for 5-7 minutes, until a nice golden brown. Leave to cool for a couple of minutes. Use the templates to trim the parts and then leave to cool completely, preferably overnight.

8. Make spares or pepparkakor (gingerbread snaps) with the leftover mixture.

sweets of your choice, optional

The quantities above will make enough icing to make a snow garden as well as icing for the house. If you only want to ice a house, divide the quantities suggested above by three.

9. Whisk the egg white in a large bowl until frothy. Using a large spoon or a mixer on slow speed, add the icing sugar a tablespoonful at a time. Stir in the lemon juice and beat the icing until it is very stiff and white and stands up in peaks. Cover the surface with a damp cloth while not being used.

10. Spoon the icing into a piping bag fitted with a small nozzle and pipe the walls and door, but leave icing the other parts until the house is assembled. Icing is harder than it looks, so, unless you are a very experience icer, I recommend keeping the design really simple.

11. Spoon some icing onto a suitable board and landscape as desired to make a snow garden.

12. Make the glue by slowly melting the sugar in a saucepan, stirring until it is golden yellow and slightly viscous. Leave the pan on a low heat, to prevent the glue from hardening, while you glue the parts together.

13. Dip the edges of the walls into the glue, push together and stand up in the icing, using a box or a spare pair of hands for support if necessary. If the glue begins to set, reheat it gently.

14. Repeat with the door, roof and chimney, working as quickly as possible so that the glue does not set.

15. Ice and decorate the roof and chimney as desired.

– It is fun making a pepparkakshus with children or grandchildren, but the glue can burn so it is probably best if an adult glues the pieces together.

– Some parts, especially the walls and door, are easier to ice (frost) before they are glued together.

– Swedes would normally use either mörk (dark) or ljus (light) syrup, depending on how brown they like their pepparkakshus. For this recipe I think the syrups recommended below are good enough, unless you happen to have some Swedish sirap (syrup) in your cupboard.