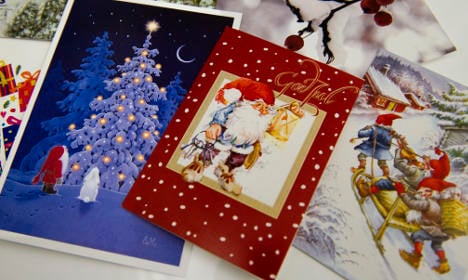 But in their complaint to the Justice Ombudsman, the convicts claimed they are under-stimulated and want access to more activities, including Christmas card making, which they said led to an improved atmosphere last year.

The inmates are irked because the prison promised activities like guitar lessons, painting classes and beadwork, but have yet to deliver.

In response, the facility explained that refurbishments have impacted its range of leisure activities, and promised that once that process is over there will be more space for hobbies.

The much-coveted Christmas card making session is one of the activities promised to return, with more courses and workshops also on the agenda.

“The guitar course is according to my information under way, so it’s ongoing right now. There are meaningful activities,” Salberga deputy prison director Daniel Hultman told P4.

“There’s a very serious fire both in one of the buildings and in piles of paper recycling,” said police press spokesperson Magnus Jansson Klarin.

The alarm was raised at 1.30pm on Monday. It was declared under control later that afternoon, but firefighters were still fighting to put out the fire completely on Tuesday morning.

It’s unclear how dangerous the smoke is, Jonas Eronen, another police press spokesperson told SVT. “But obviously, it’s never good to inhale smoke from a fire”.

The fire is in the Boländerna part of Uppsala. A VMA, or Important Message to the Public, was issued on Monday informing everyone in the city to stay inside and close all windows and doors.

“It will take a while before it’s under control,” Jansson Klarin said.

The fire is in a building close to the train line servicing Uppsala, which meant all trains in and out of the city were stopped. Many trains were cancelled or diverted.

“It’s so that people sitting on the train don’t inhale smoke, and we also need to turn off the power while we put out the fire,” track operator Josef Gustafson told SVT.

The Transport Administration opened one of the two tracks on Monday evening, with the other opening early on Tuesday morning.

“The trains should be moving as usual now and there’s no danger. We’re in control of the fire and the tracks aren’t damaged,” fire service operator Kurt Holm told TT.

“It’s an extremely serious fire and we’re not going to be able to save the building,” he said. Gustafson described the risk of the fire spreading to be “very low”.

A failed attempt was made to lessen the strength of the fire at around 11pm on Monday evening.

“We tried to remove the bales which were on fire and those which had not yet caught fire with a crane lorry, but there was such a heavy ember shower that we were forced to stop,” Holm said.

Fire services were still on-site at 8am on Tuesday morning with six firemen, one fire engine, a ladder truck and a water tank. The risk of collapse is making their work more difficult.

“We can’t really get to all the areas we need to to put out the fire,” Westerberg said. “Now and then we’ll actively put out part of the fire, but at the moment we’re mostly monitoring”.

“We’re just going to let it burn now, we’re on site to monitor the fire and protect surrounding areas and the railway,” Holm said.