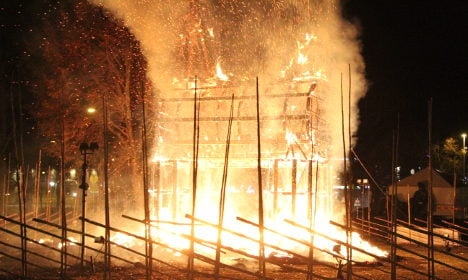 The 2016 Gävle Christmas goat, only hours after it was launched. Photo: Roger Nilsson/TT

The 13-metre-tall, 3.6 tonne straw goat in Gävle, central Sweden was launched for the year’s festival period on Sunday afternoon. But by 11pm it was engulfed in flames.

“There will be a great, great sadness for Gävle residents, the Gävle goat and for all of its fans over the world,” Maria Wallberg, a spokesperson for the goat’s organizers told news agency TT.

The huge yule goat is built every year in Gävle’s Slottstorget square, and there is enough hype for the build-up to be shown live on Swedish web TV channels. The goat also has a degree of international fame – thanks in no small part to the tradition of someone destroying it, year after year, most commonly through the use of fire. It even has its own Twitter account.

Oh no, such a short amount of time with you my friends. But I shall rise from the ashes and see you next year again!

In September, local politicians said they would try to have a ‘goat guarantee’ that it would survive its first weekend of the 2016 festive season.  A number of high-tech security cameras were bought to try and protect it, yet they were unable to detect the goat burner.

Organizers said that the culprit managed to get past security when one of the two guards patrolling the area left briefly to go to the toilet, and the other one was on the other side of the goat.

Police are looking for the perpetrator and have launched a preliminary investigation for inflicting gross damage.

No arrests have been made, and officers will continue the investigation during Monday. Police did not want to comment on how the fire may have been started.

“We don’t know how the fire started so unfortunately I can’t comment on that. We are very interested if there are more people who made observations from the scene. It’d be great to hear,” Police Central Region spokesperson Matilda Isaksson told news agency TT. Organizers first insisted that they would stick to the rule of one goat per year and that this year’s incarnation would not be rebuilt, regardless of how short lived it was. However, later on Monday they hinted that it could yet rise from the ashes.