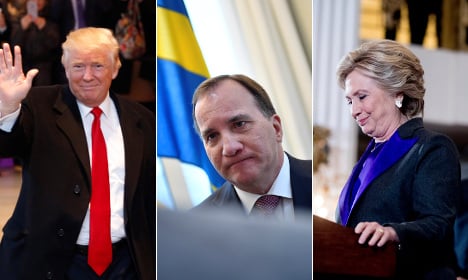 As The Local reported last week, large sections of the letter Social Democrat leader Löfven sent to congratulate US President-elect Trump were blacked out when it was shown to the Aftonbladet newspaper.

But the Expressen tabloid has now got hold of the full version of the mystery note, as well as the letter Löfven would have sent to Clinton had the Democratic candidate won the election instead.

In the previously censored parts of the letter to Trump, Löfven urges the Republican President-elect not to cut transatlantic ties and remain involved in European security politics.

“Global and regional challenges require transatlantic cooperation. The United States' engagement in Europe is central for both European and American security. Sweden is committed to the security situation in Europe and in our neighbourhood through partnership with Nato, bilateral security and defence cooperation with key countries such as the United States. The promotion of dialogue and reduction of tension are fundamental elements in our approach.”

The letter moves on to highlight Sweden's role in contributing to the anti-Isis coalition – Sweden supplies troops in Iraq – and humanitarian aid across the world. “We value our cooperation with the United States on anti-terrorism and on countering violent extremism,” writes the prime minister.

Trump's scepticism of free trade has been of particular concern to Sweden, much of whose economy depends on international trade, and Löfven argues that a trade agreement between the US and Europe would generate jobs in both regions. “Swedish businesses and industry directly supprot more than 300,000 jobs in the US. The benefits from Swedish investments are providing jobs in all 50 states,” he writes.

Expressen has also published the letter centre-left prime minister Löfven, who prior to the election said he was backing Clinton, would have sent to the former Secretary of State had she won.

One of the main differences is the greeting. Where the letter to Trump only states “I congratulate you upon your election”, Löfven's letter to Clinton adds “it is a pleasure for me” to do so.

“As the leader of Sweden's – and the world's – first feminist government, I attach great importance to the fact that you will be the first woman to take office as President of the United States. It is a milestone for the world. I am looking forward to cooperating with you and your administration on how to increase gender equality worldwide,” he writes.

The letter goes on to address many of the same points, but also mentions Sweden's role as a non-permanent member of the UN Security Council next year, and stresses the need to address the situation in the Middle East. “Only together can we responsibly manage the large global migration and refugee flows and achieve global development and prosperity,” writes Löfven.

The Swedish government offices had previously refused to hand out the uncensored version of the letter to the president-elect, saying it could interfere with Sweden's international relations.