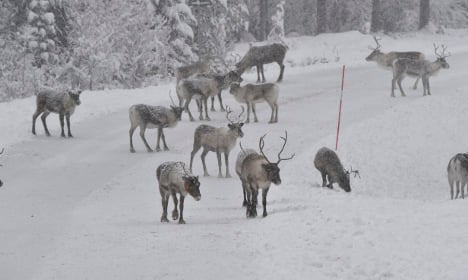 A herd of reindeer moves silently down the mountain, their silver coats and majestic antlers blending into the Swedish tundra as their herder leads them to their winter grazing grounds in the plains below.

“It's a painful life, but the most beautiful there is,” says Margret Fjellström, who owns several hundred reindeer in Dikanäs, a village in Sweden's mountains 800 kilometres (500 miles) north of the capital Stockholm.

“My identity depends on this life. When a fawn is born, we forget all of our troubles,” the 30-year-old Sami tells AFP.

Every autumn, the reindeer are taken to their winter pasture in the plains by their owners, the Sami – formerly called Lapps – the only people authorized to herd reindeer in Sweden.

In Dikanäs, helpers on snowmobiles and quad bikes prepare for the move by leading thousands of the animals into an enclosure.

There the fawns are marked, and the adults are separated. The fattest are sent to the slaughterhouse – their meat is considered a delicacy in the Nordic countries – while the others are sent to the forests in the plains teeming with lichen, a type of moss that makes up the reindeer's main diet.

Fjellström's lasso whirls above her furred hat as she shouts out orders to her helpers. Around her waist in a sheath rests the indispensable knife used to carve the mark in the animals' ears.

They need to move quickly. Night falls before 3:00 pm this far north, the semi-domesticated reindeer are getting stressed and the herders are exhausted from a hard day's work.

Under the watchful gaze of a group of fascinated children, the herders lay the reindeer down and hold them still as they mark and vaccinate them.

The herders then load them onto the trucks that will take them to their winter pasture, 200 kilometres east.

In Dikanäs, reindeer herding is no longer done the traditional way, on foot: the animals' journey through the wilderness full of peat bogs, dense forests and lakes has become too perilous.

With global warming, the crossing has become more treacherous as the ice on the lakes is not thick enough to walk on yet.

“The water (current) is strong and therefore impassable, or the ice is too fragile. A farmer from a Sami village a little further north drowned in early November,” Fjellström recalls.

This leaves the herders no other choice than to take to the road, even though it costs more.

Other dangers lie in wait. Forty percent of fawns die from the cold, while wolverines, bears, wolves, lynx and eagles all prey on the reindeer.

“Sweden has decided to protect its species to diversify its wildlife. That's good, but is it fair that I have to pay for it?,” she asks.

The ancient Sami practice of reindeer herding also faces other challenges. Climate change has brought thicker layers of ice that prevent the reindeer from reaching their lichen, forcing herders to supplement their diet with costly fodder.

The reindeer are also frightened by the roar of wind turbines and the din of machinery used in the encroaching logging and mining industries, prompting breeders to increasingly file lawsuits to protect their livelihood from these obstacles.

“Every generation of breeders has its cross to bear. For my father's, it was Chernobyl,” Fjellström says, noting that the fallout from the 1986 nuclear catastrophe in Ukraine poisoned the moss and lichen in Sweden.

Although 30 years have passed since then, some reindeer in the Arctic are still radioactive.

To make ends meet, Fjellström works in the off-season as a hotel receptionist and her husband works in the forestry sector. Until April, when they take the reindeer back to the mountains.

Sweden has 4,600 reindeer owners for just over 250,000 animals, according to the Sami Parliament.

Semi-domesticated reindeer can be found across the northernmost part of Europe, and are raised for their meat, pelts, and antlers, which are used to make handicrafts. Wild reindeer also roam freely in forests, mostly in Norway.

This feature was written by AFP's Jonathan Nackstrand and Gael Branchereau.