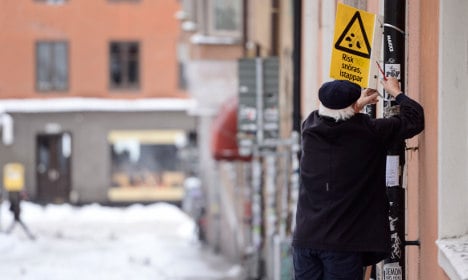 As The Local has previously reported, meteorologists expect that Sweden is going to have a much colder winter than normal. We have already seen signs of it, with more snow falling in Stockholm earlier this month than on any other November day since records began in 1905.

And it is only going to get colder, starting on Thursday when the mercury is set to drop significantly, according to weather agency Storm.

“We have definitely entered a period of colder weather. You could call it a winter offensive,” meteorologist Johan Groth told the Expressen tabloid on Tuesday, certainly not mincing his words.

The central Svealand region can expect temperatures of around three to four degrees below zero on Thursday. In Norrland it will be far colder: starting at -12C and down to -20C, according to Storm.

“It will be below freezing even during the day, except perhaps the coasts of southern Götaland,” said Groth.

On Tuesday national weather institute SMHI had issued class-one warnings (the least serious kind on a scale from one to three) of snow and icy roads in much of northern Sweden.

Here's a picture one of our editors took of the snow in Stockholm two weeks ago:

The streets are paved with ice.