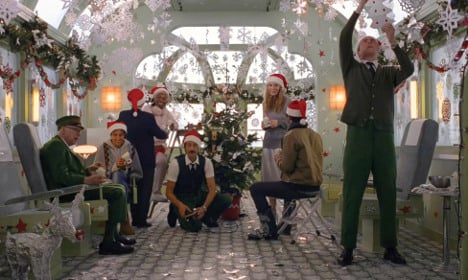 Screenshot from the video. Photo: H&M

Retail giant H&M's advert is unusually sociable for a company with its roots in Sweden, showing a group of strangers who end up celebrating Christmas together after getting stuck on a train in a snow storm.

Directed by Wes Anderson, the short film stars Oscar-winning actor Adrien Brody as the train conductor in charge of organizing the festive party. By Tuesday it had chalked up more than two million YouTube views.

“This story may resonate more than ever at a time in the world where we could all do with giving a stranger a hug,” said Brody himself in a press statement.

Despite the obvious commercial motive behind it, the heartwarming message has already gained a following.

“Too many things to be cynical about and damn it, a Wes Anderson Christmas ad just won't be one of them,” wrote a third.

Watch the video here and make up your own minds: