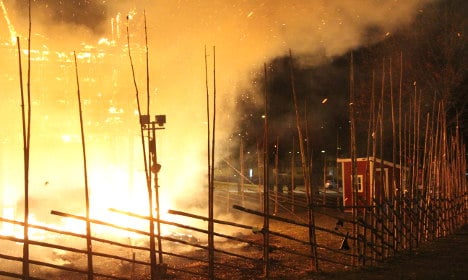 The 2016 Gävle goat in its final hours. Photo: Roger Nilsson/TT

On Sunday, the 13-metre-tall straw goat in Gävle, central Sweden was burned down only hours after it had been inaugurated for the year. While attacks on the Christmas tradition are just as well known as the goat itself, the early timing of this year’s assault was unfortunate, given Gävle is celebrating the 50th anniversary of its Christmas icon.

Rebuilding the original goat was considered, but the organizers eventually decided to fill its place with a smaller straw goat built by local high school students instead.

The smaller goat will be moved to the same spot as the older, bigger one on Thursday afternoon, and Gävle council has now invited locals to “honour the memory” of the barbecued straw animal at the same time.

The enclosure where the Christmas favourite once stood will be opened up to allow goat mourners the chance to pay tribute to one of 2016’s least lucky figures by “placing goats of various types” beside its replacement.

Small straw goats are traditional Christmas decorations in Sweden, so there will be no shortage of replicas on hand for those keen to honour their hero.

“We want to take advantage of the incredible dedication that the people of Gävle and fans around the world have shown in recent days,” Gävle Bocken spokesperson Maria Wallberg explained in a press statement.

The bizarre memorial can even be watched live via the Gävle tourist board website, which has a web camera filming the location.