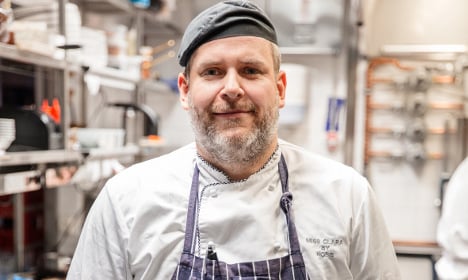 By the time Daniel Guest moved to Stockholm in 2002 he had already worked in several countries outside his native England, so the change wasn’t quite as jarring as it can be for many setting up home in the Swedish capital for the first time.

“It was easy. Wherever my hat is I’m home: I worked in London for many years, worked in Italy a bit and worked in France in a three Michelin star restaurant,” he tells The Local.

“I got an opportunity to work at Operakällaren with Werner Vögeli and Stefano Catenacci. I had to choose between Le Manoir aux Quat'Saisons with Raymond Blanc and Sweden. So I chose Sweden!”

The move wasn’t particularly tricky, but he did notice fairly quickly that working in Stockholm’s restaurants would be different to what he was accustomed to.

“Coming from 90s London and a three Michelin star place in France, Stockholm was great. A lot of chefs in Sweden think with their heads and work with their heads, but the British and the French work fast, they look like they’re busy but they’re not very productive,” he laughs.

“The Swedes are very methodical thinkers and I enjoy working with them. They listen, they understand what they want to say and react, they’re very good thinkers.”

Though the 39-year-old believes that in a kitchen “if you can cook, you don’t need language”, he admits that the barrage of unfamiliar Swedish words was something of a challenge in the early days.

“When I first came here it felt a bit like speaking Japanese, a different language tree. For me it was crazy. I was a bit paranoid the first couple of weeks, but I found the Swedish very helpful. Even after a busy service people would help me.”

And along with the local tongue, Swedish customers also had their particularities.

“I’ve never had a dish sent back in 16 years, but I want people to send things back!” he insists. “In New York or London they’re more honest. In the restaurant scene here in Sweden, people eat, pay, but then just won’t come back.”

After almost a decade and a half in Sweden the Englishman thinks there is plenty to love about the country’s food, even if it isn’t as well promoted as the classical French cuisine he is trained in, for example.

“They’re very proud of their food traditions and have a fantastic history of food, their ‘husmanskost’ (traditional Swedish food). They have a huge repertoire of those kind of dishes, designed for the seasons,” he observes.

“It’s similar to the Scottish or English in that they have a foundation of cooking but it isn’t promoted to the same point of the French, Italians or Spanish.” Guest in the kitchen at Miss Clara. Photo: Krogklubben STHLM

Guest doesn't love everything about Swedish food however. Like any chef, he has an opinion on what works well and what doesn’t, and during his time at Operakällaren, the obligation of sticking rigidly to Swedish traditions was an occasional bugbear.

“I worked there for nine years and did Julbord – the traditional Swedish Christmas menu – every year. The first year I worked there, we were doing peas for lutfisk, and I thought ‘oh my god, what is this?’,” he exclaims.

“They were special dried peas from Åland which they have every year, but I thought mushy peas are better… I was a bit young and naive so I said ‘chef, why can’t we do mushy peas? This is shit!’. And he was like ‘nope, this is how we do it’.”

Though the chef describes himself as a traditionalist at heart, altering some of the parts of the Swedish Christmas menu he was less keen on was always an aim. Now he finally has a chance to do that with Miss Clara’s popup Christmas restaurant Ca 30.

“I had to do it for nine years, and it’s good, but I thought we could make it better. For nine years I was thinking I could have some fun with it, but I couldn’t do it,” he begins.

“So what I’ve done is I've taken a flavour from every dish, like the revbensspjäll (pork ribs), I’ve taken the ginger there and done it with ginger and miso instead. With the lutfisk, I’ve done it with mushy peas. I’m all up for traditions, but being English and having done this food for nine years and having respect for it, I though I could mess around with it a bit.” The chef's Swedish julbord with a twist. Photo: AWB

As fun as taking on Sweden's Christmas favourites is, the driving force behind his work at Miss Clara is much bigger than that. A significant part of Guest’s philosophy is to take care with the kind of sugars he uses in his cooking, something inspired by an observation he made while taking his son to daycare.

“There were about 30 kids there and eight of them had allergic reactions to certain things. I thought ‘what the hell, really?’. I started thinking less about the prestige of who I was working for and more about who I was cooking for. I realized we have a problem in this industry, there are certain things we have to fix. It opened my mind to a lot of things.”

That pushed Guest to start doing some research, and what he discovered changed his outlook on food.

“I looked at India, the Dominican Republic as well as third world countries. They don’t have big problems with diabetes, or big problems with heart disease. So I went back further in the history of food: sugar, carbohydrates, gluten. Basically, I got to a point where I understood that in the last 250 years companies have bastardized the industry, fucked with the product and fucked with what we eat. They’ve poisoned us,” he claims.

In an effort to combat that, he only uses unrefined sugars at Miss Clara. But there is a fine balance to be struck between taking a stand and not ruining a customer’s experience, he emphasizes.

“People don’t want to hear every day that what they’re eating is bad, that it’s poison or nasty. They want to enjoy food. We took a stance at Miss Clara: we’re going to use unrefined sugar, and if people want to ask about it in detail, we’ll talk about it, but we don’t want people to fall asleep at the dinner table.” That kind of concern with the bigger picture sounds very, well, Swedish. The Stockholm resident admits that his adopted home has had an impact on his way of thinking.

“They think about the environment and a lot of things before they put a plate of food out,” he notes. “Hats off to the Swedish, I’ve learned a lot from them.”

There are still some things about Sweden that have yet to take however, and one of them is something many see as a good reason to move here in the first place: the famous Swedish work-life balance.

“It’s great for families here, they have the right idea. But personally I’m a bit of a workaholic and haven’t taken advantage of it,” he admits.

“The English work ethic, the way we work, the Swedish appreciate it, but they’re always telling me to take it easier! To have a more balanced life. But I’m brought up in a certain way…”

Being the Christmas season, we couldn’t resist putting one last question to a man who has spent much time picking this country’s festive treats apart recently. If the Miss Clara head chef were to recommend one Swedish Christmas dish to internationals, which one would it be?

“Honestly? Ris a la Malta. It’s the closest you can get to rice pudding! I’ve put rice pudding on the menu many times and the Swedes don’t like it. The Brits are fantastic with puddings, and I’ve tried, but the Swedes are just like ‘no’. They won’t eat it.”

“But I like ris a la Malta. It’s the closest you can get to a British pudding and my kids love it. It’s good!” he concedes.