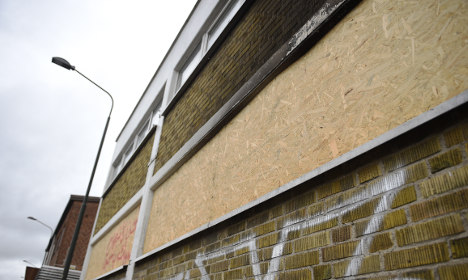 The building that was smoke damaged in the arson attack. Photo: Emil Langvad/TT

The Syrian citizen has instead been remanded accused of arson, in relation to a fire in Malmö on October 11th which caused smoke damage to a community centre.

The chief prosecutor had pushed for the incident to be described as a terror offence, but after a three hour remand hearing, Malmö district course decided that was not the case.

“There are very high conditions that need to be met for something to be a terror crime. In my closing statement I said that the prosecution is far from that. And the district court clearly agreed with it,” defence attorney Lars Edman told news agency TT after the hearing.

On the early hours of October 11th, two Molotov cocktails were thrown into a Malmö building used by Iraqi cultural association Aldorr.

The incident provoked little media attention both in Sweden and abroad, but in the immediate aftermath, Isis magazine al-Naba claimed the fire was started by “a warrior from the caliphate”, and that the centre was used by “infidels”, which in the context of their article was believed to mean Shia Muslims.

An Aldorr spokesperson told Swedish news agency TT that the building is not a place of worship, but rather, a community centre, and while members are Shiites, the association's activities are not primarily of a religious nature.

Swedish terrorism expert Magnus Ranstorp noted in October that the Isis claim to the attack should be taken “with a pinch of salt”, and that the extremist organization has “a habit of taking responsibility for everything”.