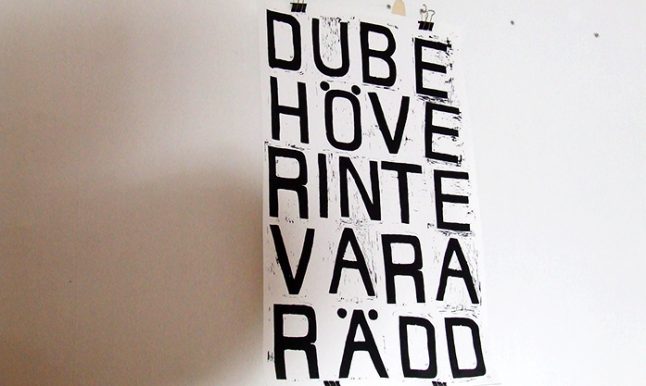 A poster on the wall in Alberto's apartment reads: 'You don't need to be afraid'

Three years ago I came here as an exchange student. I was lucky: my university offered me student accommodation as soon as I got off the plane and headed to Uppsala.

But by the time I had completed my undergraduate degree I was registered as a refugee. And when I moved to Linnaeus University in Växjö to write my thesis I learned first-hand what a struggle it was to find somewhere to live.

My thesis earned me the highest grade in my department but the university wasn’t able to help me find accommodation. I ended up renting a couch in an underground room I shared with two other people. That’s right: three people in a small room!

One of my roommates tried to escape our dungeon-like dwelling and move into more humane living quarters. He found an apartment but the landlord, a Swede, told him: “I will rent the place out to a refugee but you’ll have to pay double.”

That surprised and depressed me. I stayed put for eight months until I graduated in 2015 and moved to my brother, who’s also a refugee, in Belgium.

I came back to Sweden a few weeks later and started looking for a job. Fortunately, some good friends were kind enough to let me sleep at their places.

Then I got a job as a journalist and took on the ultimate challenge: finding somewhere to live in the capital, Stockholm.

I was advised to advertise myself on Blocket, the Swedish version of eBay, where Swedish landlords can search for and cherry-pick tenants.

I wasn’t the lowest-hanging cherry, but two people did get in touch. I chose the one closest to my work, a room in a lovely Swedish family’s apartment. Six months later I was asked to leave: the family needed the room.

So, I got back on Blocket and asked friends for help. One friend put me in touch with Karin, my current landlord.

Karin is a typical Swede: a lovely, decent, respectful human being.

I moved into a room in her big apartment near where I work. No culture shock, no fuss, no tension. She has become a close friend and when it comes to language I consider her a mum.

She offered me a fair rent and I’m glad to share her place.

However, I’m quite sure I’ll sooner or later have to leave, and find another place. There will always be landlords as kind as Karin, and others as greedy as those asking newcomers to pay double rent.

Dealing with accommodation in Sweden has made me feel like a Bedouin roaming the Sahara in search of an oasis.

Until I can get a place of my own, I hope I’ll always meet the Karins.

KARIN'S STORY: 'Refugees are not scary: rent out your free space to them'

The interviewee asked to be referred to as Alberto Salmoneh. This is not his real name.