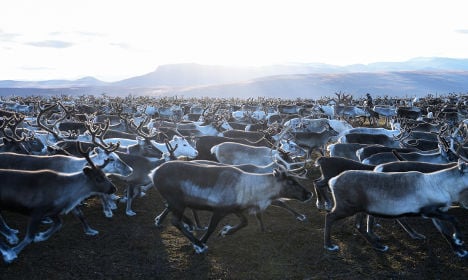 According to Sametinget, the parliamentary body representing the indigenous Sami people in Sweden, more than 6000 road accidents involving reindeer took place in 2011-2015.

Almost 6000 railway incidents were reported in the same time period.

Most of the accidents happened on the road between Gällivare and Kiruna in northern Sweden.

Reindeer move around in large herds, and it is not unusual for several of them to get killed in one single accident. Last month ten died in a crash with two cars.

Sweden's national transport administration Trafikverket has adopted a series of recent measures, for example heat sensors, in an attempt to bring down the number of animals killed on the road.

“It's a job that's about to be started, and we [the government and Sametinget] will meet in a year and see if there have been any results,” said Infrastructure Minister Anna Johansson.

According to Sweden's National Wildlife Accident Council, 1,517 reindeer have died in traffic accidents so far this year. That compares to 37,594 roe deer, 4,998 elk and 3,665 wild boar.