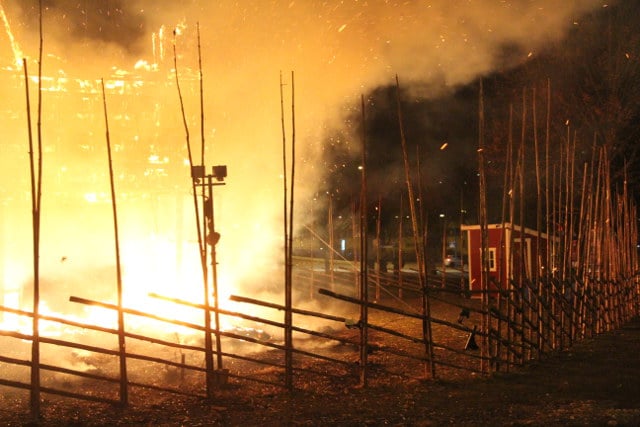 The 2016 incarnation of the 13-metre-tall straw animal burned down on the same day as it was inaugurated last month, bringing an early, anti-climactic end to the 50th anniversary of the Swedish icon.

Year after year the festive figure is constructed, and year after year someone manages to destroy it. The local council had promised that this time would be different and even invested in high-tech security cameras in an effort to protect it, but they were unable to get the better of 2016’s goat burner, who apparently bypassed security when guards went to the toilet.

Almost two weeks later the hunt for the culprit is still on, and now, Gävle’s police will be helped by the major crime unit from neighbouring Hälsingland in an effort to bring justice to the Swedish Scrooge.

Incredibly, this is the first time that a major crime unit has crossed the province’s borders from Hälsingland into Gästrikland (Gävle's province) in order to help its neighbour with an investigation, newspaper Hela Hälsingland reports.

Appropriately, the coat of arms for the Hälsingland province happens to be a goat, known as the Hälsingebocken (Hälsinge goat).

“We are from Hälsingland and feel we must defend the goat. We have connections with the Hälsingebocken, so as a result the Hälsinge group is taking over,” Hälsingland major crimes unit commissioner Rickard Eriksson joked to Hela Hälsingland.

“It’s historic. As a resource we’re primarily for Hälsingland, but now we’re going in and helping Gästrikland. It’s a special case and in Gävle they’re just happy to get help,” he added.

As for how the hunt for the goat burner is going, police hope that DNA analysis of a hat found near the scene could be the key. Witnesses also say they saw someone throwing liquid at the straw animal, ignite it, then flee on a bike, cycling past the local police station.

For anyone wondering how the goat’s smaller replacement is faring: the mini-version is now back on its feet after being run over earlier this week. A live webcam feed is currently following its fortunes.