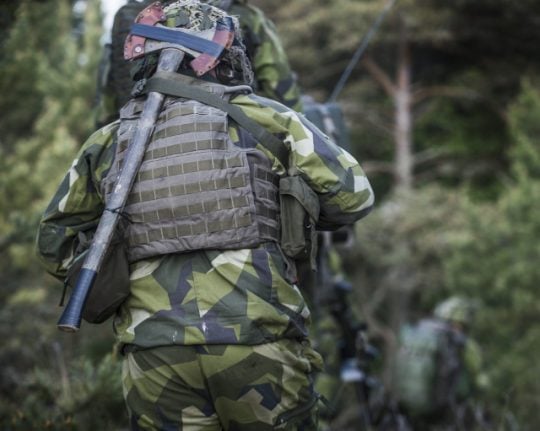 File photo of a Swedish soldier not related to the story. Photo: Yvonne Åsell/SvD/TT

The soldier said he was scratched on the right shoulder as well as the left of his abdomen with a weapon described as “sharp and shiny”.

“We had an exercise in a restricted area where there shouldn’t be anyone present without clearance. One of our soldiers felt unwell and went to a cabin. There he was met by what is thought to be two people who didn’t have authorization and were not part of the exercise,” John Lidman, the Swedish Armed Forces communications officer responsible for the area told The Local.

“A situation arose where the soldier was scratched and received minor injuries. We don’t have much to say beyond that,” he added.

The incident was reported to police on Monday, but investigators said there was little progress made so far.

“The investigation is at a standstill, we have no leads to pursue and nor do we have descriptions of the two people who are said to have attacked the soldier,” Anders Ragnesten who is in charge of the preliminary investigation at Uddevalla police told SVT.