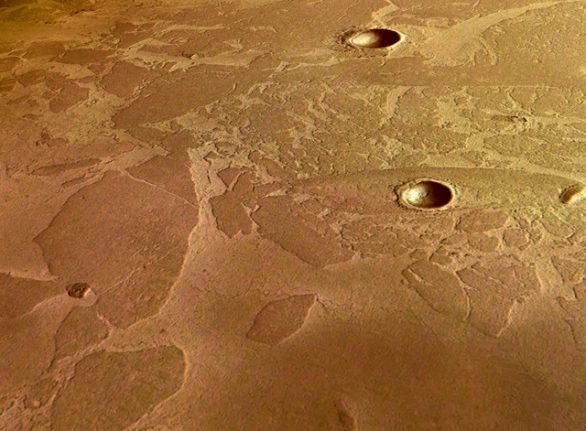 An ESA image of the surface of Mars. Photo: ESA/DLR/FU BERLIN/G. NEUKUM

And according to the only Swede ever to travel to space, it’s a realistic goal. Astronaut Christer Fuglesang thinks it is a political and economic question rather than a technical one, and that the country is not investing enough despite its talent in the field.

Sweden is currently one of the 22 nations involved in the European Space Agency (ESA), but sending another Swede into space would likely require broader international cooperation, the astronaut said.

“Sweden needs to be a bigger participant in the ESA to get a Swede to go,” Fuglesang noted.

He was invited to speak about Sweden’s chances of going to Mars and its space potential by the Liberals at a presentation of their new proposals for Swedish space policy.

“To start with Sweden needs to have a space strategy,” Liberal MP and space enthusiast Mathias Sundin noted.

Along with the headline goal of having a Swede on Mars by the 2030s, the proposed Liberal space strategy also includes improving the support for “space startups” and investing in space tourism.

But the Swedish government minister currently in charge of space-related issues thinks focusing on less eye-catching areas like navigation, communications and Earth observation is more important than trying to reach the red planet.

The Swedish government is currently working on its own space strategy based on recommendations an investigator made last year. One of the suggestions is to develop the space centre at Esrange, near Kiruna in northern Sweden, to make it capable of sending up small satellites.

The chances of a Swede reaching Mars are not quite as small as they may seem, thanks to Swedish-American astronaut Jessica Meir.

She was selected for Nasa’s elite astronaut programme in 2008, and after completing her training, is currently awaiting a mission assignment.

“Yes, I’ll be the next Swede in space,” Meir told Aftonbladet.

“I don’t know when it will be, but I think I can get an assignment within one, two or three years. After that I have to train for two years for the mission. So within three to five years I’ll be out in space,” she added.