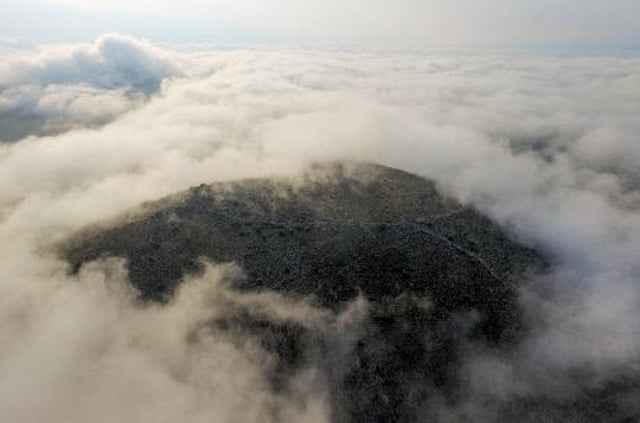 The top of the hill. Photo: SIA/EFAK/YPPOA

Archaeologists from the University of Gothenburg and University of Bournemouth have begun exploring the remains of the ancient city at the village of Vlochós, five hours north of Athens, around the Strongilovoúni hill.

Some of the ruins are previously known, but have until now been dismissed as the remains of a small, irrelevant settlement, said Robin Rönnlund, the head of the group. It was not until he and his colleagues started exploring the site that it turned out to be larger and much more significant.

Speaking to The Local, he said: “It feels great. I think it is [an] incredibly big [deal], because it's something thought to be a small village that turns out to be a city, with a structured network of streets and a square.”

The area inside the city wall measures over 40 hectares.

In a statement published earlier in the day, the PhD student in Classical Archaeology and Ancient History said: “A colleague and I came across the site in connection with another project last year, and we realized the great potential right away. The fact that nobody has ever explored the hill before is a mystery.” Walls and towers as seen from the air. Photo: SIA/EFAK/YPPOA

The team discovered finds, including ancient pottery and coins, dating back to around 500 BC during their first two weeks of field work in September. After that period, the city is believed to have flourished from the fourth to third century BC, before it was abandoned – possibly when the Romans conquered the area. Remains of walls, city gates and towers have been found on the hill and the team plans to find out what is hidden beneath the surface, by using ground-penetrating radar rather than excavation, at a second field project starting in August next year. They believe the answer could provide more clues about life in this era.

“Very little is known about ancient cities in the region, and many researchers have previously believed that western Thessaly was somewhat of a backwater during Antiquity. Our project therefore fills an important gap in the knowledge about the area and shows that a lot remains to be discovered in the Greek soil,” said Rönnlund in the statement published by Gothenburg University. Some of the researchers behind the project. Photo: SIA/EFAK/YPPOA

The Vlochós Archaeological Project (VLAP) is being run in collaboration between the Ephorate of Antiquities of Karditsa and the Swedish Institute at Athens. Researchers from the University of Gothenburg in Sweden and the University of Bournemouth in the UK are exploring the site in 2016-2017.