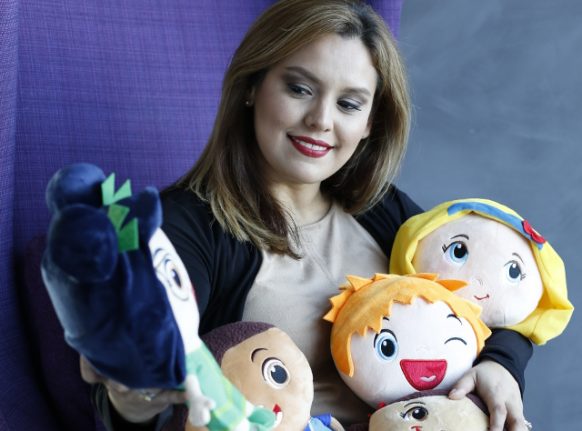 “They have to understand that the world has changed and we're living in a globalized world. It doesn't matter where you're from, what you look like or what you do – everyone is equally worthy.”

But let's rewind the tape by three years, to a few days before her seven-year-old niece's birthday.

Alfredsson, a 33-year-old from Mexico City, had gone to the toy store to buy her niece a present, and was stunned. But after the anger had settled, that defining moment turned out to be the start of something new.

“I went to the dolls' section and they all wore makeup and had big breasts and didn't look like children,” she explains. “It was quite scary to see this image children are being fed of beauty and success. At the same time there are eight-year-olds out there talking about going on a diet. I decided to change that.”

She created My Esteeme, a series of six dolls – all with different appearances, interests, hair colour and skin colour – designed to boost boys and girls' self-esteem and to promote diversity in an entertaining way.

“First of all, they look like children. If you go to a toy store, the dolls look either like babies or adults and there are not that many different ethnicities. These look like the kids themselves,” she says.

But the dolls also have an educational purpose. They are equipped with a device hidden in their feet, which when pressed makes them repeat phrases such as “I am worthy”, “I like who I am” and “I am a good friend”. Alfredsson's niece is still very much part of the project – she and her brother provide the dolls' voices.

“She is too old for them now, but she has been part of this every way. I have to say the most fantastic thing is the kids' reaction to the dolls. Normally they will take the doll that looks like them, but then they talk about the others as well: 'this is me, and this is my friend.' And when you hear the kids repeat the phrases, 'I am worthy, I am a good friend', it feels so good,” she says.

Although My Esteeme is a few years in the making, it was only this year Alfredsson decided to quit her job as marketing director at Malmö company Pixelant to fully focus on her new startup.

“I knew it was the right decision because I truly believe in this. My Esteeme is not just a business, it is something I stand for. It is my motto,” she says.

She has spent the past year developing the first prototypes and testing them in Swedish preschools, and is in the final days of a kickstarter campaign to get the project off the ground which will enable her to start mass producing the dolls and make them available for purchase. The six dolls. Photo: My Esteeme

By coincidence, Alfredsson speaks to The Local just days after major Swedish retailer Åhléns was forced to withdraw parts of its Christmas campaign from social media after a picture of a young dark-skinned boy dressed as iconic saint Lucia received large amounts of racist abuse online.

“It is terrible. It really, really hurt us. We are four women in the company, all from different countries – my marketing manager is from Romania, my communications manager is from the US and our finance expert is from Colombia – so of course we're very sensitive about those topics.”

But just as the majority of social media users came out in support of the young Lucia, Alfredsson is convinced that diversity will win in the end, not just for children but in the adult world too.

“We joke that we are the most multicultural company in Malmö and we're very proud of that. I think it makes a fantastic dynamic in the office, with different points of view and discussion. It is key to the success of My Esteeme and I think many big companies could learn from that,” she says.

And diversity is not just about nationality, she argues, adding: “The funny part, even in Sweden, is that there are so many men running startups. When we go to events we are the only women there.”

“But Malmö has a fantastic, fantastic startup scene,” she quickly notes. “It's a small city, so it is really easy to schedule meetings, and we're like a family, we help each other, we encourage each other.” Alfredsson and some of the children testing the prototypes. Photo: My Esteeme

Alfredsson was nominated as 2016 Female Inventor of the Year in Sweden, but getting to where she is today was not an easy ride. She faced the same struggle on the labour market reported by many other immigrants when she left a good job in Mexico City and moved to Sweden six years ago after meeting her husband.

“I have two masters, I speak English, I was working in communications as a press secretary for a politician in Mexico, so I thought 'how difficult could it be for me to find a job?'. Then I came here and had to face reality. I sent CVs everywhere, no one called me back. I felt depressed and like I had somehow lost my identity. In Mexico I was a person, but who was I here?”

When she asked Arbetsförmedlingen, Sweden's national employment agency, for help she was told to change her career and was assigned a temporary contract working at a pre-school. It did turn out to be useful experience for founding My Esteeme, but at the time it was a struggle.

Eventually she found a mentor and was shown how to improve her CV for the Swedish market, which helped her land a marketing job at an IT company, first in Copenhagen and then in Malmö.

“I am so happy to live in Sweden, it has given me so much. I love Malmö so much, I consider myself a Mexican Malmöite, and also Swedish,” Alfredsson laughs. “But it was tough, you know, it was very tough.”

“I hope that my story can inspire other foreigners, because I know there are a lot of people in the situation I was in, that if you believe in yourself and if you have good self-esteem then things will work out in time.”