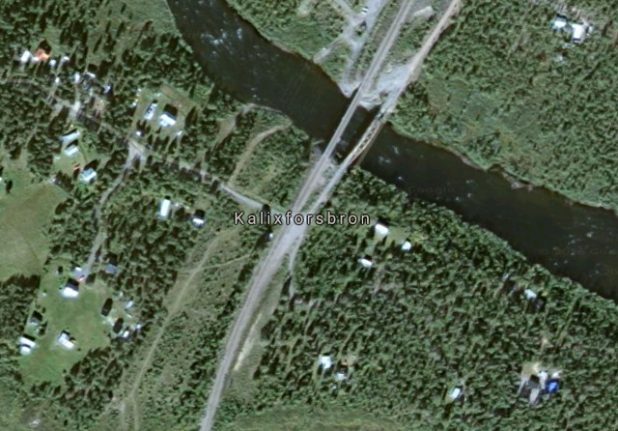 Kalixforsbron only has one road crossing over the Kalix river. Photo: Google Maps

The Kalixforsbron bridge crosses the Kalix river 20 kilometres south of Kiruna, and connects the village of the same name to the public road network through a six-kilometre gravel road.

Originally designed as a railway bridge, it is the only connection between the village and Sweden's roads, but now the Swedish Transport Administration (Trafikverket) says it will be demolished unless someone else agrees to take on the cost of maintaining it before the end of the year, SVT reports.

“Everything will become more difficult. If the bridge goes we will need to use a boat to cross when the river isn’t frozen. It freezes first at the end of December and thaws in March/April. From October it is unbelievably difficult to cross the river via boat though because ice forms at the banks, so for about 3-4 months a year it’s nearly impossible to cross,” Kalixforsbron resident Patrik Stålnacke told The Local.

“There’s a railway bridge I suspect people will end up walking over but that’s hazardous and also illegal. I don’t really know how people with kids will cope with it because they need to cross daily to get to school. I also wonder how the old people in the village will be able to stay,” he added. The bridge has been used for cars since the new railway bridge was built in the 1980s, and the rail line which runs through the village does not stop there. The old bridge will cost around eight million kronor ($872,570) to maintain for the next 50 years, according to the Transport Administration.

The authority argues that the bridge is not part of Sweden’s road network and is therefore not their responsibility, and with neither the local Gällivare or Kiruna municipalities wishing to take over, its days look numbered.

“Gällivare municipality, Kiruna municipality and the Transport Agency should agree to collaborate on maintaining the bridge. It’s not just used to get across the river, it's also a landmark,” Stålnacke insisted.