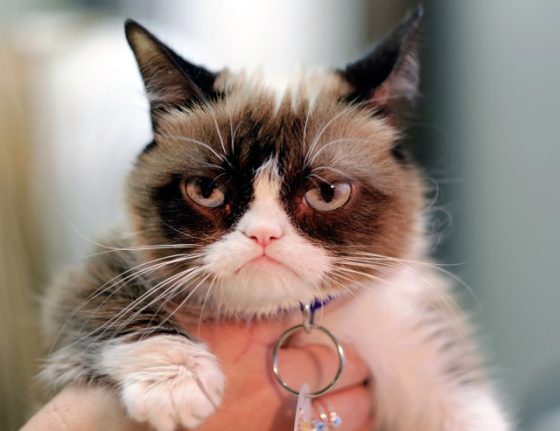 File photo of a grumpy cat not related to the story (except in emotional state). Photo: Richard Vogel/AP

Now in my 27th year on this earth, I have recently accepted that I am grumpier than most, and instead of resisting, I've decided to embrace it. With that in mind, here's a list of Swedish words I find to be particularly annoying for little to no rational reason.

Disclaimer: some only really apply to the Swedish capital and its surrounding area, but living in Stockholm, that's unavoidable.

What it means: Wonderful, fabulous, tremendous, stupendous.
Why I hate it: For those not aware, it’s pronounced almost identically to the English “nice”, and I hate it because it’s not even really a Swedish word, and plenty of Swedish words would do the same job.

Plenty of the time substituting it with “trevligt” for example, an actual word in Swedish, would make no difference. Also, the presumably phonetically formed Swedishized spelling reminds me of a small child’s attempts to write words in English for the first time.

What it means: Great, cool, awesome, good.
Why I hate it: I have no scientific evidence to back this up, but in my mind, the Swedish slang use of “fett” to express a positive reaction to something is some twisted form of the American English “phat”, which is by now the kind of thing your dad says to make it sound like he’s down with the kids. He isn’t, and Swedes who say “fett” aren’t either, they just think they are.

Oh, and let’s not forget the doubly horrendous use of “fett najs”, a combination of two culprit words that is an actual thing. Here’s proof:

What it means: Stolen from the English term for excrement, used to express surprise.
Why I hate it: Much happens to the meaning of a word when it’s borrowed from another language, and I fully accept that this one doesn’t carry anything like the same weight when used by a Swede as it does in its original form, but as a native English speaker I still can’t help but turn my head when I hear an alarmed Swedish four-year-old tell his or her parents “shit!”, only for the adult to not bat an eyelid.

Look out in particular for the juvenile phrase “shit pommes frites!” – literally “shit, french fries!” – which is your average kid’s way of saying something similar to “wow!”, and is actually abhorrent. Foulmouthed Swedes.

What it means: Flatulence, which frankly, no one likes.
Why I hate it: Aside from the context for this word usually meaning there’s a foul stench in the air, there’s something about the almost onomatopoeic way it sounds that’s particularly disgusting. Say “fissssss” with an exaggeratedly long 's' the next time someone tries to do a sneaky one on the bus or metro and you’ll know exactly what I mean. If they’re Swedish, they will too. Speaking of metros…

What they mean: Abbreviations for “T-centralen” and “tunnelbana”.
Why I hate them: I have it on good authority from friends who are Stockholm natives that these weren’t used back in the day when we were kids (i.e: the 1990s), so by default that makes the newfangled abbreviations relating to the Swedish capital’s public transport completely wrong, even if I have no childhood experience of my own from which to justify my loathing.

“TC” is apparently short for T-centralen, the main hub of the Stockholm metro, the correct name of which is already shortened enough (the “T” stands for “Tunnelbana”). “TB” meanwhile is short for the very “tunnelbana” itself, which as The Local’s managing editor helpfully pointed out, doesn’t actually work as an acronym anyway, given “tunnelbana” is one word and the correct abbreviation would therefore be “T”. Scoff.

What it means: Pleasant, sympathetic, enjoyable. Unfortunately, the opposite, “osoft”, also exists.
Why I hate it: If there’s one Swedish (slang) term that makes my skin crawl it’s this. Again, it’s no doubt mainly a mother-tongue issue given this is probably borrowed from English, but hearing a person being described as “soft” in an effort to explain that they are pleasant just sounds creepy to my ears. Similarly, if someone tells me their holiday was “soft”, my brain’s instant reaction is to think it couldn’t possibly have been nice because you’ve just described it in a terrible, terrible way.

What it means: A lazy way of making it seem like everyone and everything in Sweden is balanced – at least in this context.
Why I hate it: The Swedes are only partially to blame for this one: really it’s the international use of the term, by now a huge cliche, that has ensured it gets on my nerves.

You may know what I mean. “Oh everyone in Sweden is so lagom, right?”, “Oh but of course, in Sweden everything is lagom, not too much or too little”. The worst culprits are English-language documentaries on Sweden (I’m looking at you, Hugh Fearnley-Whittingstall), where a Swedish talking head will usually do their best to ham it up and agree that yes, everything in Sweden is truly “lagom” and everyone is bound by that sacred code, all the while conveniently forgetting that if you go to a busy nightclub in a Swedish city on any given weekend, you’ll find a lot of not-so-lagom goings on. Trust me.

PS: To anyone who uses the terms above, try to take my complaints in the light-hearted spirit with which they were made. Oh, and have a fett najs Christmas.

READ ALSO: The article that inspired this list – the absolute worst words in the Danish language