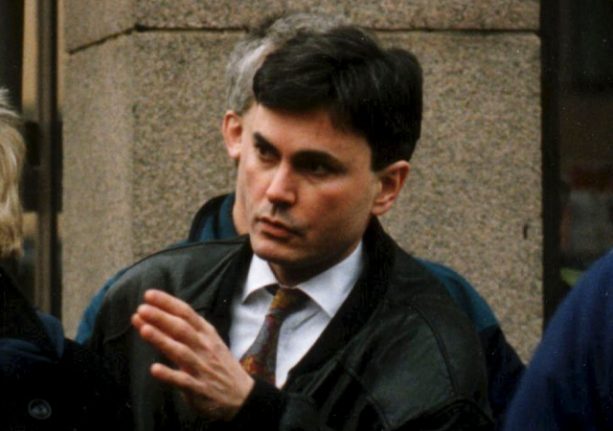 German police had asked Swedish authorities to extradite John Ausonius, 63, for questioning over the murder of 68-year-old Blanka Zmigrod, who was shot in the head at close range on her way home from the Frankfurt restaurant where she worked in 1992.

Södertörn District Court approved the extradition request on Thursday, but said he should be returned to Sweden to continue serving his jail sentence whether or not he is found guilty.

Ausonius was sentenced to life in jail in the 1990s Sweden on one count of murder, ten counts of attempted murder and nine robberies.

After his arrest, police tracing his trips abroad discovered that he had been at the restaurant the week before Zmigrod's murder, and had argued with her over a Casio electronic calendar he believed she had stolen.

The weapon used in the murder had the same 6.35mm calibre as Ausonius'.

He denies the German allegations, but expressed a willingness to go to Germany as long as he could return to Sweden to serve his punishment.

He was interviewed once by German police at Sweden's Kumla Prison in 1996, but nothing came of it until two years ago when police came to Sweden to hold further interviews.

Ausonius was the son of a Swiss father and a German mother who had emigrated to Sweden.

He was bullied at school for his dark hair and brown eyes and as an adult died his hair blond, wore blue contact lenses and changed his name from Wolfgang Alexander Zaugg.

Between August 1991 and January 30th 1992, Ausonius murdered one person and shot another ten, most of whom were dark-skinned immigrants, in the Stockholm and Uppsala areas.

He was named 'Lasermannen' by Swedish media after the rifle equipped with a laser sight he used for the first of his murders. He later switched to a revolver.