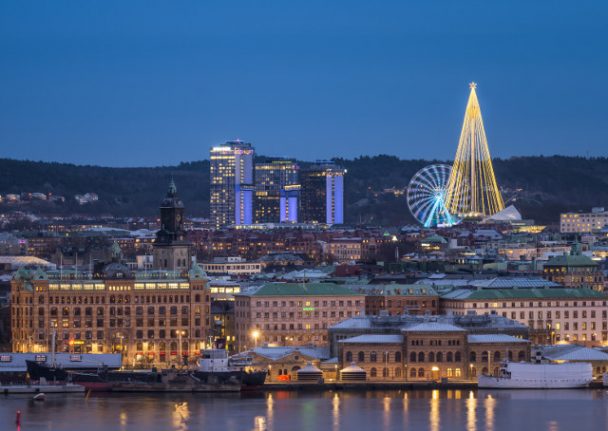 Gothenburg is a good place to be this Christmas. Photo: Anders Wester/Göteborg & Co

Sweden’s second city is really going all-out this Christmas, hosting a whole range of events under the banner of “Christmas City Gothenburg”, so there’s no shortage of things to do if you’re there during the latter stages of December.

If you feel like finding out more about the abundance of Christmas lights decorating the place, then there’s a guided tour on December 22nd which will detail their history as well as that of the streets themselves. The tours run at 3pm and 5pm respectively, require signing up beforehand, and most importantly, start with glögg and ginger bread. Here’s the info you need.

Another standout feature of Christmas in Gothenburg this year is its singing Christmas tree, where different choirs perform every day in the run up to Christmas Eve. December 23rd is the last chance to see it, so why not go and have a listen before winding down for the big day? The singing takes place at Kungsportsplatsen on Avenyn at 3.30pm and 4.30pm daily.

If you’re looking for company on Christmas Eve or want to spread some cheer, Gothenburg’s St John’s Church (S:t Johanneskyrkan) is providing Christmas food and sweets in collaboration with the City Mission charity, as well as a church service of course. Its doors are open between noon and 8pm on December 24th.

No Christmas in Gothenburg would be complete without visiting one of the city’s biggest attractions, the Liseberg amusement park. The park has been taken over with snowmen, is hosting the Nutcracker ballet on ice, and has more Christmas-themed stuff going on than pretty much anywhere else. A guide to its huge Christmas celebrations can be found here. They’re on until December 23rd, before taking a brief break then resuming between the 26th and 30th.

The capital has plenty happening this month too, and an obvious place to start is by having a traditional Swedish Christmas meal – a julbord. We won’t list the places holding them because there’s simply too many, but check your favourite eateries to see if they’re offering one, chances are they will be. Oh, and make sure to read our helpful guide to the whole thing.

A bit of physical activity goes a long way when it comes to lifting spirits during the darker months, and a perfect way to do that while also enjoying Christmas music and festive lights is to go ice-skating at Kungsträdgården. The rink is open between 9am and 9pm throughout the month (except Christmas Eve when it’s closed), and you can rent skates if you don’t have your own. Prices can be found here.

For a more tranquil experience, some last-minute Christmas food, decorations and wreaths can be brought in the pretty surroundings of Rosendal’s Gardens between Tuesdays and Sundays during the festive period, and on December 18th there’s a special light show planned, complete with a fire to keep you warm, once the sun sets. The event is free with donations optional, and more information is provided on the official website here.

Swedes like many others celebrate Christmas on December 24th, which can sometimes feel jarring if you’re from one of the countries that celebrate it on the 25th, but if going out to the pub to catch up with friends is the way you’re used to spending Christmas Eve, all hope is not lost. A number of Stockholm’s bars will be open on the night of the 24th this year, and a list of some of them can be found here.

Stockholm can't quite compete with Liseberg, but it does have open-air museum Skansen, and the old favourite hosts one of Sweden's best-known Christmas markets. Packed with sweets, traditional foods and produce, and gallons of glögg, the last chance to visit is on the weekend of December 17th and 18th. Check the official site for prices.

The jewel in the crown of Sweden’s third city this December is its Christmas markets, and the biggest starts at Gustav Adolfs torg in the city centre then spreads all the way down Södra Tullgatan and over Davidshallsbron. It’s open between 11am-7pm on weekdays and closes an hour later at the weekend.

If ice-skating is your thing, then Folkets Park is the place to be, where a rink is in place until March. It’s lit up at night and there’s music too. Opening hours are 10am-8pm, and renting skates is free, so there’s no excuse for missing it.

Finally, why not take advantage of one of Malmö’s unique perks by catching the Öresund train over to Copenhagen and checking out Tivoli’s famous Christmas market? It’s open until December 31st, so there’s still time to plan a quick trip. Train times can be found here, and admission prices for the market here.

If you’re studying in Uppsala but can’t make it back home for Christmas this year, why not use it as an opportunity to visit the city’s beautiful cathedral? The resident choir is holding a carol and Christmas song service on December 18th, with one taking place at 4pm and another at 7pm.

If there are still a few gifts or decorations left on the to do list meanwhile, the handicrafts market at the Kaleido cooperative’s store and gallery is a great place to pick them up. It’s open daily during the Christmas period.

A photo posted by KALEIDO KONSTHANTVERK (@kaleido.konsthantverk) on Dec 13, 2016 at 1:13pm PST

Students in the south of Sweden need not be left out either. Christmas concerts will be a regular feature at Lund’s Klosterkyrkan until December 21st, including atmospheric late night services that run past midnight. Times can be found here.

On top of that, there’s Lund’s Christmas fair, which will be held for the last time this year on the weekend of December 17th and 18th. Choir singing and horse sleigh rides make it the ideal way to spend a winter day. Everything you need to know is available on this website.

If you’re dreaming of a white Christmas, then snow is pretty much guaranteed in Kiruna, and one of the best ways to take advantage of it is to visit the Christmas market in the middle of the city. There’s all the usual favourites like glögg and treats, as well as specific things for kids like a Santa workshop. It will be held for the last time on December 18th.

An unusual but likely entertaining way to spend December 25th in northern hub Umeå is to check out some high-octane harness racing in the form of the city’s Winter Trot Classic at Umåker racecourse. Twelve races will take place starting at 2.45pm on the day, and there’s an after-party at the pub afterwards to help warm up. More information (in Swedish) is available here.

Northern Sweden lays claim to arguably the most impressive building in the country in the form of the famous Icehotel in Jukkasjärvi, and Christmas is as good a time as any to visit and see how it looks after being redesigned and rebuilt as usual this year. Moreover, it’s also a chance to be one of the first people to see the new permanent section, Icehotel 365. The official website has prices, opening hours and how to get there.

Nr 13 LUCIA CELEBRATION AT ICEHOTEL Students from Hjalmar Lundbohmsskolan, Kiruna. Photo: Asaf Kliger @asafkliger Alongside Midsummer, the Lucia celebrations represent one of the foremost cultural traditions in Sweden, with their clear reference to life in the peasant communities of old: darkness and light, cold and warmth. Lucia – the bearer of light – is an ancient mythical figure with an abiding role as a bearer of light in the dark Swedish winters. The many Lucia songs all have the same theme: The night treads heavily around yards and dwellings In places unreached by sun, the shadows brood Into our dark house she comes, bearing lighted candles, Saint Lucia, Saint Lucia. All Swedes know the standard Lucia song by heart, and everyone can sing it, in or out of tune. On the morning of Lucia Day, the radio plays some rather more expert renderings, by school choirs or the like. The Lucia celebrations also include ginger snaps and sweet, saffron-flavoured buns (lussekatter) shaped like curled-up cats and with raisin eyes. You eat them with glögg or coffee. Source: Sweden.se #icehotelsweden #visitsweden #icehotel #lucia #santalucia #swedishlapland #withinthecircle #iceflight