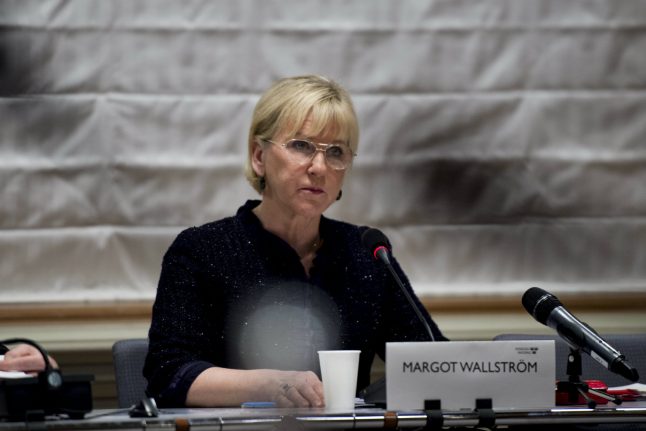 Swedish foreign minister Margot Wallström. File photo: Nora Lorek/TT
Wallström met, amongst others, Palestinian foreign minister Riad Malki.
“Sweden's foreign policy is aimed at creating the future possibility for Israel and Palestine to exist side by side. It is deeply upsetting that young Palestinians are beginning to lose hope after 50 years of occupation,” Wallström said at a press conference.
Prior to the West Bank trip, many called for the Swedish government to set higher standards for its Palestinian counterparts, who have been accused of human rights abuses and corruption.
Wallström, too, has stated that the Palestinians must “shape up”. On location in Ramallah, the foreign minister said that she had brought up such issues during her meetings with the Palestinian leaders.
“We have discussed this in all of the meetings. We have come as friends, but real friends can be critical. Especially if they are offering aid and assistance,” said Wallström according to Expressen.
Wallström is not scheduled to meet Israeli officials during her trip to the region.
Asked why there were no meetings planned, Israeli foreign ministry spokesman Emmanuel Nahshon blamed “schedule problems” and declined to provide further details.
Wallström previously told news agency TT: “I would have gladly seen myself travel to Israel as well, but unfortunately they do not welcome it.”
In January, Israel's Deputy Foreign Minister Tzipi Hotovely said Wallström would no longer be welcome in the country after she called for investigations into the killings of Palestinian assailants by Israeli forces.
Israeli forces have faced accusations that they used excessive force in some cases in which knife-wielding Palestinians were killed.