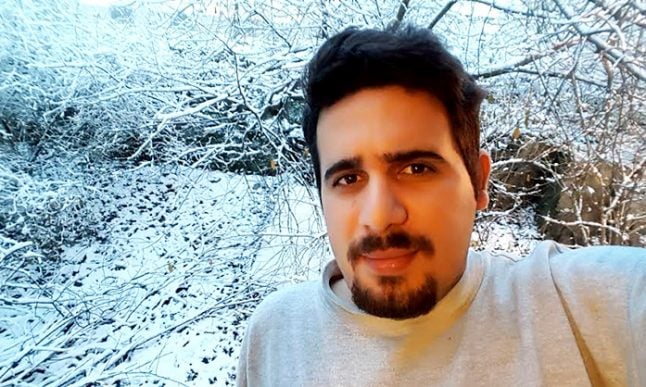 Around ten thousand Persian-speakers follow his daily Swedish lessons, which are popular in his homeland, Iran.

It all started eight months ago when Sirmin set up a Swedish language account on Telegram, a social media platform popular among Iranians, to share what he’s been learning with other Persian-speaking asylum seekers.

“In February 2016 I started learning Swedish. I was living in an asylum camp in Tanum municipality to the west of Sweden, along with around 160 other asylum seekers. I spent eight hours learning Swedish each day, and started sharing my lessons with the others.”

“My language improved as much as theirs did through sharing the lessons, so I decided to expand to a larger audience of refugees and newcomers. I chose to make a public Telegram account because it's such a well known app among Iranians.”

The number of followers rose dramatically as it became clear there was a real need for simple, online Swedish lessons aimed at Persian-speakers.

Sirmin says it's impossible to find a Swedish textbook for Persian speakers, which makes it much harder for Iranians to study the language.

“Most of the language resources are either in Swedish or English, and maybe Arabic – but there's nothing in Persian.”

“Many Iranians may not have higher education, and others may not speak good English either, which makes it harder for them learning the language. What I’m doing is helping to fill this gap,” says Sirmin.

The fervent language learner spends five hours a day preparing two lessons to be posted on his account – even holidays don’t put a stop to his zeal.

“Now people are waiting for my lessons every day,” Sirmin says.

“Some followers don’t believe that it’s only me running the account, and insist that I’m either a Swede or there’s an institution behind me.” He continues with laughter: “Others complain about inefficiency in SFI (the government-provided Swedish for Immigrants courses) as well.”

Sirmin has recently started publishing culture lessons on his Telegram account as well. He posts Swedish songs with lyrics, as well as audio recordings of him speaking Swedish.

His influence has grown in Iran, and three private language schools accredit his lessons now for their Swedish classes.

“Three institutions are currently using my channel in Iran, because I believe, there are no Swedish language resources there. So, I am exporting Swedish to my homeland.”

“Nonetheless, 93 percent of my followers are in Sweden.”

One of the things Sirmin most appreciates about life in Sweden is the freedom to be able to express himself.

Back in Iran he says he had a good life except for the lack freedom of expression; he had to use a pseudonym for his anti-government blogs and social media posts.

“Regular media don’t discuss critical topics about freedom and citizenship in Iran, therefore people turn to social media. I wrote critically about Ahmadi Najad and his government, and the others who followed him. But in 2014 my identity was uncovered. I fled,” Sirmin explains.

“I knew that criticism wasn't allowed, but I felt like I had a responsibility to speak out. How will society become illuminated and be able talk about human rights and freedom of expression if everyone is afraid and silent?’”

“My appreciation of Sweden, and of the chance to be a free human being here, is beyond words.”