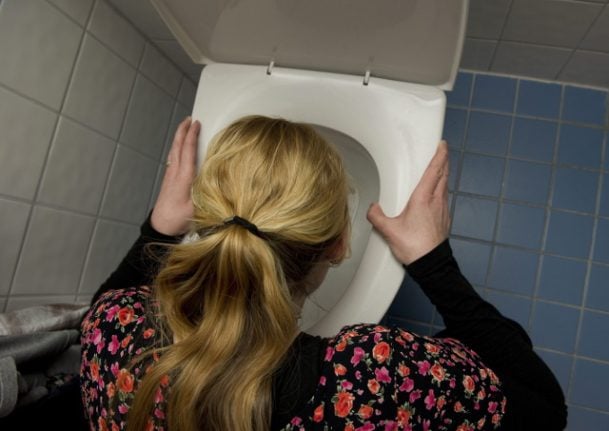 Not the way you want to spend Christmas. Photo: Jonas Ekströmer/TT

The number of infections usually peaks during the late summer months then drops off, but this year has yet to see a notable downward curve, Sweden’s Public Health Agency (Folkhälsomyndigheten) warns.

The growth coincides with an increase in campylobacter among flocks of chicken in Sweden, and fresh chicken is therefore thought to be a culprit.

“The explanation we have right now is that we eat a lot of chicken. We eat a lot of fresh chicken, and campylobacter can be found in the fresh chicken to a certain extent,” Folkhälsomyndigheten spokesperson Britta Björkholm noted.

“If you’re not careful with your hygiene you risk coming down with it,” she added.

Between August and November 2016 twice as many cases were reported as normal, and that pattern has continued into the last month of the year.

About 100 cases are usually reported in December, but in December 2016 the number was almost 300 by the middle of the month.

“People are not being sufficiently careful about separating raw chicken from utensils and work surfaces,” Björkholm insisted.

If you want to avoid the bug, Folkhälsomyndigheten’s advice is to be particularly careful with hand hygiene, washing hands carefully before preparing a meal and directly after handling raw meat or chicken.

Work surfaces should also be kept clean and clean utensils used, with knives and chopping boards washed thoroughly after cutting raw chicken. The meat should always be cooked through.