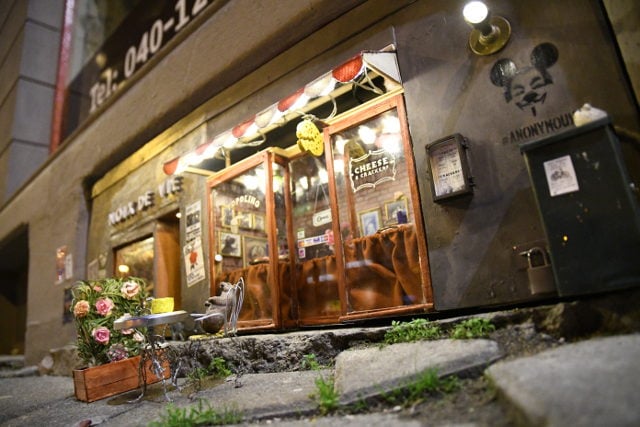 The artists behind it are an elusive bunch, going only by the name “AnonyMouse”, but after much effort, The Local finally managed to speak to them. And the good news for fans of the tiny artwork is that its creators promise the next installation will be even better.

“Things have been crazy here,” one of the artists told The Local via an e-mail, which was sent under the pseudonym “Pärlan Mousekewitz”.

“They talked about us on The Late Late Show with James Corden just the other night. It has been really exciting watching the little scene spread all over the world. We’ve seen articles from as far as Australia, Nigeria and Argentina, and every one has been very supportive,” the mysterious mouse enthusiast added.

For anyone who missed the artwork’s appearance on the US TV show, The Local featured it here, along with a bizarre video of life imitating art, when a real mouse paid a visit to the mini restaurant, Il Topolino.

Asked whether they now feel the weight of expectation for the planned 2017 follow-up to be just as good, the artist struck an inspired tone:

“Of course we feel the pressure for the next installment. But we’re working on it day and night, so we’re confident that it’s gonna be even better than the previous one.”

“To think it would get even one percent of the attention the current one has would be foolish,” Mousekewitz conceded however.

For anyone heading to Malmö who has yet to see the phenomenon in the flesh, the good news is that it is hoped it will stay in place for as long as possible

“The big test with the installation on Bergsgatan was to see if it would survive last weekend. It did, so we’ll leave it out. As long as people take care of it,” the artist concluded.

So far Malmö’s residents have looked after the anonymous gift admirably, even going as far as adding new parts to it. You can read about some of the best additions here.