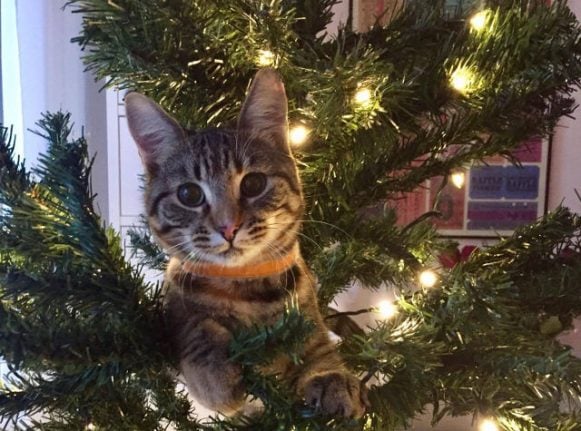 Anna-Carin Gustavsson from Lysekil in southern Sweden found that out this year when her young cat Stina decided that the family’s new Christmas tree is something that should be attacked on a daily basis, as the video below captures well.

“She climbs the tree several times a day. I usually don’t bother too much, she’s allowed to stay there. It’s only hard work when she does it late in the evening and at night when I don’t want her to wake the kids,” Gustavsson told The Local.

“The plastic tree seems pretty stable, it hasn’t been toppled, yet! But a few branches have been felled,” she added.

Plenty of cat and pet owners will likely relate to the clip, which has been viewed more than 15,000 times and perfectly sums up how much we let our animals get away with.

Gustavsson admits she doesn’t have any useful advice for how to deal with the Christmas conundrum:

“My kids say I’m useless at disciplining cats, so I don’t have any tips to offer! But others say you should use a water spray.”

“She’s an outdoor cat and likes to climb over everything outdoors too. Otherwise she’s a relaxed playful little animal who gives the house a lot of happiness,” she concluded.