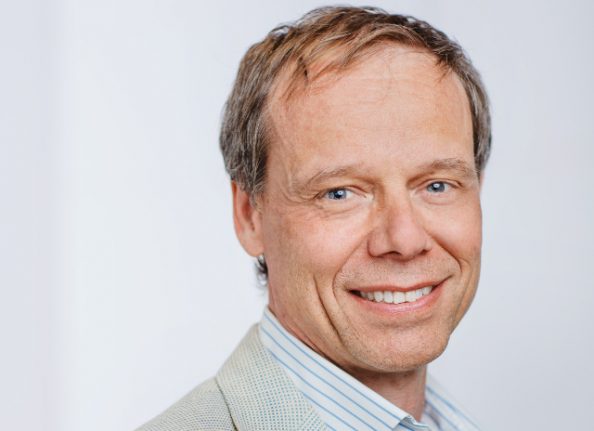 This week 10 years ago, Christer Fuglesang landed back on earth as the first Swede in space.

But his journey from the suburbs of Stockholm to beyond the earth’s stratosphere didn’t happen overnight – although the trained physicist has spent much of his career on the cutting-edge of science.

After serving as a primary mission control coordinator for a mission to the Mir space station in 1995, Fuglesang was chosen to for training to support space shuttle missions run by US space agency NASA.

Nevertheless, it would take another decade before the high-flying Swede would make it into space as a Mission Specialist on the STS-116 shuttle mission in December 2006.

Looking back ten years later, Fuglesang still has vivid memories of the moment he first stepped foot into space.

“When I think back I think of the whole journey; getting up into space, the space walks,” he tells SI News. “It was really exciting heading out of the airlock for the first time.

“But I was so busy concentrating so I didn’t make any mistakes I wasn’t really thinking about much else.” Christer Fuglesang moves through the airlock as he returns to the ISS in 2006. Photo: Nasa

As it turned out, Fuglesang’s first space mission in 2006 wasn’t his last. In 2009, he once again lifted off aboard a US space shuttle on a mission to deliver equipment to the International Space Station (ISS).

He’s quick to admit that being Sweden’s first – and so far only – astronaut has had a lasting impact on his life.

“I’ve had so many opportunities to do things because of my journey into space,” he says.

Among other things, the unique distinction led to Fuglesang being awarded the King’s Medal in 2007 and being named Alumni of the Year by the Royal Institute of Technology (KTH) in 2012.

Since 2013, Fuglesang has been an adjunct professor in space physics at KTH, on secondment from the ESA. He also spends part of his time working for the Swedish National Space Board (Rymdstyrelsen).

Not surprisingly, his main research focus is related to space: studying the effects of radiation and cosmic rays on the ISS. He also teaches a course on human spaceflight.

But 2017 will be a year of transition for Fuglesang.

“I’ll be retiring from ESA soon because you have to retire when you’re 60,” the 59-year-old explains.

“But I expect there will be other opportunities that keep me involved in space.”

The field of space exploration is changing, he explains, as more and more private companies look for commercial opportunities.

“We can no longer rely solely on governments and taxpayer funding for spaceflight,” says Fuglesang. “It has to be commercialized and space tourism is natural first step.”

Indeed, the age of space tourism is upon us, according to Fuglesang. And while the only space tourists so far have paid millions of dollars for the opportunity, the situation is changing fast.

“It may not happen tomorrow, but within 10 years I think space tourism will be a reality,” he says. “And space tourism is good – it’s a necessity if we want to develop human spaceflight.”

And he believes Sweden is well positioned to capitalize on these developments.

“There is great opportunity for us to be a leader when it comes to commercial space travel and human spaceflight.”

The Esrange Space Centre, located above the Arctic Circle in northern Sweden, for example, has long been home to advanced space flight research and rocket launches and could serve as a hub for space tourism and other commercial space ventures.

“Sweden is in a unique position to become the only country in Europe – not counting Russia – to have the capability to launch satellites,” he adds. And space continues to fascinate and motivate Fuglesang, who is quick to list why space travel is so important.

“Space exploration helps us create a better life for people here on earth,” he says.

Research in space is “incredibly important”, he adds, helping us learn more about the universe and how the human body reacts to weightlessness and other extreme conditions.

“Doing so also helps us learn more as we look at sending humans farther into space – with Mars being the next likely destination,” says Fuglesang.

“It’s part of the drive to push the limits and expand farther into the ultimate frontier.

Looking back at what he’s learned over a long career of pushing the limits, Fuglesang offers a few tips for young leaders looking to make their mark on the world.

“Don’t be afraid of trying new things and setting ambitious goals for yourself,” he says.

“And if decide going to go for something, do it properly. Really go for it. And be sure to prepare carefully.”