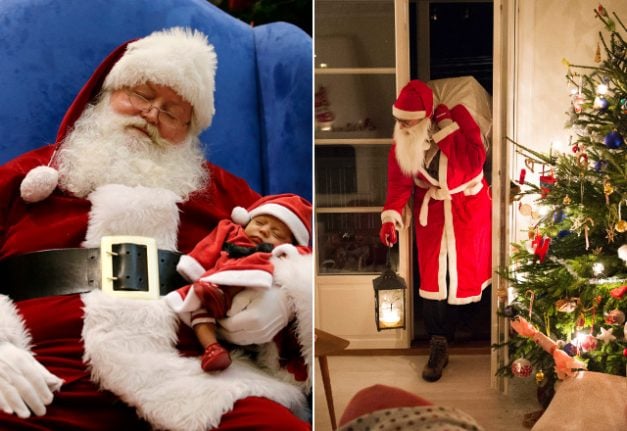 Mixing American and Swedish Christmas has always worked for my bicultural family. Although our hometown of Minneapolis, Minnesota, is basically the Sweden of the US, many aspects of the culture are different – especially when it comes to Christmas. However, both places are equally as patriotic when it comes to the superiority of their unique Christmas celebrations.

My parents, one American and one Swede, wanted to have the best of both worlds when raising their kids. Struggling to find a way to accommodate both traditions, my family created a hybrid of American and Swedish Christmas that was equally confusing as it was amazing. Perhaps some of you multi-cultural families out there can relate.

When living in the US, we baked lussebullar with saffron posted from Sweden. On December 13th, my parents attempted to recreate Lucia by singing Tänd ett ljus and Tre pepparkaksgubbar, which sadly never lived up to the pros here in Sweden.

We decorated our tree with both wreaths and fruit (Swedes often use orange pomanders). On the 24th, we ate the infamous American turkey dinner and 'Swedish' food from the pantry section of Ikea. Instead of the real Kalle Anka broadcast on Swedish television, we watched whatever old Donald Duck cartoons we had on VCR.

Before bed time, we left a couple of cookies out for Santa and some carrots for his reindeer. We woke up bright and early on the 25th and opened presents with carefully written rhymes, a Swedish tradition that is never as easy as it seems. For lunch we ate risgrynsgröt (rice pudding) with sugar and cinnamon and prinskorv (tiny sausages) with potatoes – dishes my American relatives never liked.

READ ALSO: 16 traditions to follow to fake being a Swede at Christmas When we moved to Sweden several years ago, we brought our unorthodox Christmas with us and found a way to keep both traditions alive, albeit with several changes.

Now, Santa Claus himself (who looks a lot like my aunt now that I take a second glance) visits the house with a sack full of gifts. My grandmother even introduced julgransplundring on January 13th – directly translated as Christmas tree plundering – a day filled with games and singing to extend the holiday spirit just a bit more. When deciding between julbord or turkey dinner, we thought – why not both? Julbord on the 24th, turkey dinner on the 25th. Double the work in the kitchen, double the calories – what's not to love? And finally, we learned that you can add even more anticipation during December with advent candles, giving us an excuse to sit down once a week to eat more sweet treats that we don't really need.

Some elements of our traditions no longer fit outside of the US. We no longer send family Christmas cards, they now remain distant memories from suburbia. No more Ikea Christmas food that tastes similar enough but not quite the same, either. We stopped waiting in ridiculous lines at the local mall to have a chance to visit Santa Claus, an awkward tradition which Stockholm has tried to recreate. Sadly, waking up on Christmas morning won't be the same now that all the presents were already opened the evening before.

I have to say, there is something heartwarming in the large LED elk display at the Plattan square in central Stockholm and the red carpets on Biblioteksgatan that even a 14-metre tall Christmas tree at Mall of America just can't beat. No cheesy Hallmark Christmas movie will ever bring about the same nostalgic feeling that Kalle Anka can. And there will never be better gingerbread cookies than Annas Pepparkakor with a dab of butter smeared on top (no, it's not as gross as it sounds). However, the magic of waking up early on Christmas morning will always be the staple of American tradition. I'm sure there are some aspects of Swedish Christmas that only born-and-raised Swedes can appreciate. For me, julmust will always taste just like Diet Coke. I will never quite understand the novelty in the TV series Julkalendern, a children's series shown every day in December that even adult Swedes watch. But I guess one thing is always the same no matter which country you're in: the redundant Christmas music. I guess neither Swedes nor Americans get tired of listening to those tracks on repeat for a solid three months.