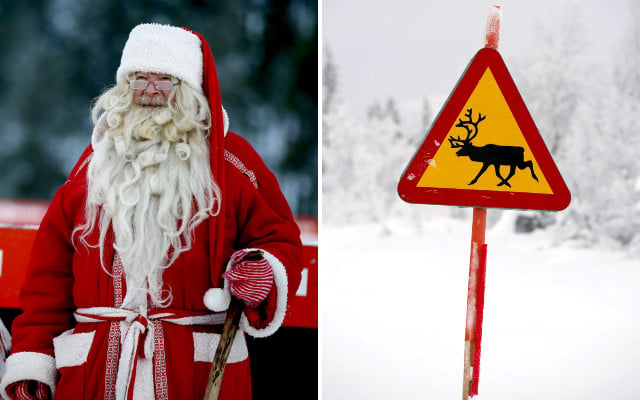 Santa Claus (left) and a sign warning motorists to keep an eye out for reindeer in Jokkmokk. Photo: Terje Pedersen/NTB Scanpix & Fredrik Sandberg/TT

Lund University’s geography department used satellite images to figure out the mean centre of the Earth’s population, and based upon that, they calculated that Jokkmokk just north of the Arctic Circle would be the best place for Santa to distribute his gifts from.

“The result can seem surprising, but when you look at a globe you understand it better. The notion that Santa would live somewhere near the North Pole isn’t completely wrong,” Ola Hall from Lund University’s geography department said in a press release.

In the study, the university used satellite images to track population movement, and by monitoring images of light at night over a period of time, they discovered that they could follow migration with a high degree of accuracy.

“Here in Sweden there are reliable statistics about how and when people move within the country. As such we could test our method to see if we would come to the same results using only the satellite images of light at night. We were surprised by how exactly we could study population movement by only looking at the light,” Hall explained.

The methodology is explained succinctly in the handy video below:

But according to the researchers, Santa would need to be accustomed to moving house regularly to keep up with changes in population distribution.

The Earth’s population distribution in the 1990s for example would have made Norwegian island Jan Mayen the ideal location for his yearly voyage of gift giving.

The methods by which the festive figure’s ideal place of residence was calculated can also be applied in arguably more useful ways, the university explained. One use is for planning purposes in regions covering more than one country, such as the Öresund region, where Malmö in Sweden and Copenhagen in Denmark are connected by the Öresund Bridge.

“When two countries are mixed it is often far trickier to compile statistics. Even in countries with unreliable statistics like dictatorships or developing countries, satellite images can be a great help to planning,” Lund University's Hall noted.

“The method opens up quite a lot for comparative global studies, something which is difficult with current statistics collected by quite different national administrations and over different time intervals,” she added.